2019 is gently coming to an end and will probably be remembered as one of the best years of the decade unless we see an improbably large correction in the latter part of the month. Most asset classes are up strongly year-to-date, with returns much higher than their long-term averages. Even within the context of last year’s negative performances and worst correlation shock since the GFC, 2019 will remain a strong year for financial assets globally by any measure. Central banks have completely reversed course on monetary policy as growth faltered and recession fears mounted. All of a sudden, unlimited monetary support was granted again, leading to large gains in bonds, equities and credit markets, ultimately pushing valuations into expensive territories. Market sentiment is flying high as major headwinds have been avoided: no recession, no hard Brexit and a phase one deal finally achieved between the US and China. Year-end is approaching fast, with near-record levels everywhere, and inevitably, the time has come to forecast return scenarios for 2020, with carry as the starting point. We’re not done yet…

Recession or no recession? That remains the question. After the broad-based and rapid deceleration observed between October last year and April this year, macroeconomic momentum has stabilised around potential, avoiding any quarters of dreaded negative growth. Our proprietary Nowcasters still indicate a low probability of economic contraction in the short run. Looking into the details, there has been a clear divergence between manufacturing, services and consumption as well as hard and soft data (driven by expectations). Trade tensions weighed on growth expectations, but (un)surprisingly GDP growth and official future projections only fell marginally. As a result, global interest rate cuts, driven first and foremost by the Fed, have been proactive in nature – more of a pre-emptive adjustment rather than a traditional rate cut cycle.

Consensus US growth forecasts are now 1.8% for 2020, compared to 1.9% a year ago. Worldwide, 2019 GDP growth is 0.5% lower than expected late last year, and 2020 expectations stand at 3.1% compared to 3.3% a year ago. In Europe, the risk of recession was present at the beginning of the year. German GDP briefly dipped below 0% in Q2, but the Eurozone as a whole should achieve 1% this year, in line with its long-term potential.

Despite investors’ defiance regarding central banks, policy makers have done the job of rapidly shifting from tightening to accommodative monetary support. On the other hand, inflation has continued to undershoot in the developed world, with the average across G7 countries plummeting far below central banks targets of 2%. This is a net positive factor for assets overall as it relieves pressures from policy makers’ shoulders.

Looking ahead, our core scenario for next year remains one of tepid yet positive economic expansion, with minimal risk of inflationary or central bank surprises. They should stay quiet at least for the first half of the year, assessing the impacts of the latest round of accommodation on the real economy.

Carry and valuation: expect less, but no need to panic yet

Carry. The starting point of all performance expectations: how much is an investment going to return if its price does not move and if everything else remains constant. In other words, what is the reward for taking the risk to invest in a risk premia (an asset class). Over the long run, this is the most stable component of performance, and it offers the advantage of being measurable at any point in time, whereas expected returns are embedded with uncertainty.

Carry on major asset classes has diminished over the year, especially on those where it is an important source of total return, i.e. the fixed income universe. Performance in 2019 has so far been stellar, but these returns are unlikely to be reproduced in 2020.

At the end of last year, high yield spreads traded at 450bps in the US and 352bps in Europe. Over the course of this year, they have compressed by 150bps and 130bps respectively, adding 6.5% and 4% in capital gains on top of ex ante carry, delivering total returns of 10% and 7.5% as at December 12th. In the investment grade space, spreads (carry) at the beginning of the year were 88bps in both the US and Europe and tightened by more than 40bps to now trade at 46bps. Total return year-to-date is 3.3%, with a large part of it stemming from spread compression.

In 2020, we expect little in terms of further spread tightening and that is why we believe that 2019 returns will be hard to repeat. In most segments, if compression is only half the amount of this year, it will pull credit spreads down to unprecedented levels. In the most optimistic case, which would require a stronger macro context than currently expected, returns will, at best, be positive but much smaller. In addition, based on history, current levels suggest a high probability of capital losses in 12 months’ time. Median expected total returns range between 0% and 3% in high yield and sub zero to 1% in investment grade – nothing quite like the exceptional 2019 vintage.

In terms of carry, another important asset class in portfolio construction is government bonds. Here again, 2019 performance has been as stellar as it was unexpected: global sovereign indices are up 7%, buoyed by the combined impact of carry (yield level and roll down), meaningful yield decreases and curve flattening. 10-year yields in major developed economies started the year at 1.6%, on average, and are now just shy of 1%, having briefly plummeted as low as 0.7%. Price appreciation has been three times higher than carry, and the same decrease in yield next year would bring long-term rates around the globe close to an inconceivable 0%.

Macro conditions, as depicted above, warrant a low level of yields for longer, and real money will keep on allocating big portions of their asset allocation to duration (they have to). However, the valuation of the asset class is amongst the most expensive across risk premia, with real yields in (very) negative territories and disconnected from fundamentals. Expectations are much lower going into 2020, and the most optimistic projections indicate a 2% to 3% performance next year, less than half of this year’s.

However, less does not mean negative, and carry-deprived investors will keep demand high, while central bank accommodation will keep liquidity flowing, benefitting these asset classes. It is therefore too early to call an end to things, but it is time to adjust allocation to this reality. Tails have diminished, but so has the beta party for 2020.

As explained, there will be less to expect from carry and beta on a global scale. The need to be selective will be more important and we believe this year’s laggards could play a strong role in achieving positive returns in 2020. Sentiment just got another boost on the geopolitical front, with the US/China phase one deal finally being signed. It is very meaningful progress and will be favourable for sectors that have been out of fashion most of this year. Diversification will also be much more important than this year, with alternative sources of return coming into play to combat the lower carry environment.

To start the year, our preference remains for growth-related asset and, more specifically, emerging market, European and Japanese equities, which have room to perform as investors seek cheaper regions now that political headwinds have eased. We also favour diversifying carry strategies in FX, Credit and Volatility. Conversely, we are staying away from real assets and government bonds. Real assets will be penalised by the lack of inflationary pressures, while government bonds will suffer from a macroeconomic stabilisation. In 2020, let’s carry on, but be selective and nimble enough to face rapid reversals in market sentiment. 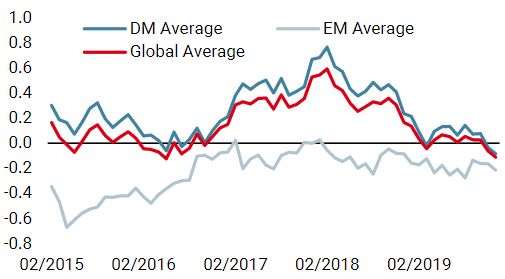 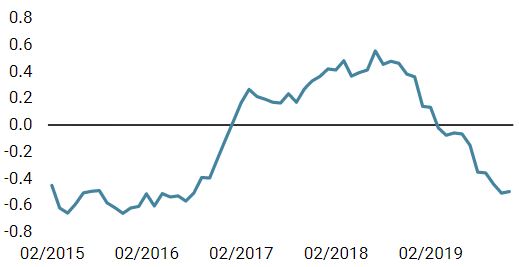 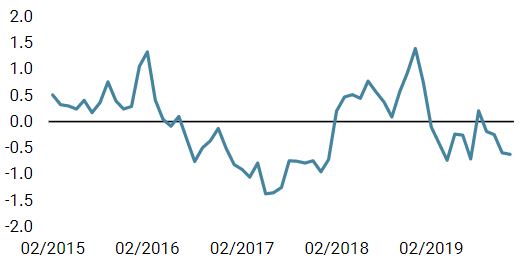 Earnings growth in all major economic zones is decelerating with notable deterioration in emerging markets. Conversely, US companies are showing...
Read more