Home / Insights / Market Views / A Shaky start To The Year – Where Do We Go From Here?

A Shaky start To The Year – Where Do We Go From Here? 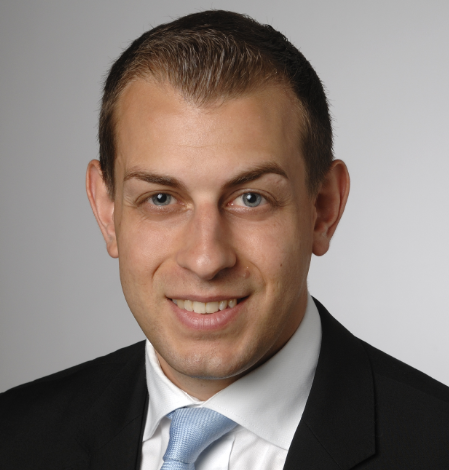 2022 has got off to a shaky start. Fears over the Omicron variant towards the end of last year have shifted to central banks and their hawkish stance, rattling the bond markets and producing a knock on effect on every other asset class. Commodity markets, the best performing asset class last year, are once again taking center stage and rallying strongly, whereas a majority of equity markets have come under pressure and are currently in negative territory, while FX markets encounter new bouts of volatility. The strong inflationary pressures that emerged from the Covid 19 crisis have finally pushed developed central bankers to react with hawkish forward guidance. This has increased the risk of a policy mistake in our view, as the timing seems less than opportune. The current central bank repricing may have further to run and we think it’s wise to lighten up in the short-term and wait for a clearer picture before re-engaging, as we still believe that the environment should remain supportive for growth oriented assets over the medium term.

Last year ended with fears focused on the Omicron variant, which was spreading across much of Europe and the US with lightning speed. Investors remained cautious until convinced that the virus was much less severe than previous variants, alleviating concerns on the potential macroeconomic impact. The equity markets – especially the US – ended 2021 near record highs. Commodity markets, however, were well off their previous highs, impacted by long liquidations driven by concerns of lower demand. The market was also heavily long the US dollar into year end.

Following Powell’s famous words towards the end of last year that it was time to retire the word “transient”, inflation markets started to price in a more hawkish normalisation. The latest FOMC meeting minutes, released earlier this month, confirmed a unanimous committee, ready to tighten sooner and faster. We now have almost four rate hikes priced in for this year, and some market participants recently called for a +50bps hike as early as March. This large re-pricing is exacerbated by the fact that we are now in the so-called “blackout period” (where no Fed members are allowed to speak ahead of the upcoming FOMC meeting this week), allowing markets to get carried away. Towards the end of last year, the pricing for Fed normalisation seemed fair to us, but this view has been challenged, as rate hike pricing moved even higher, rattling markets. In the current environment, we therefore prefer to lighten up our exposure to growth assets until the storm passes, while we stand ready to re-engage, as our core view remains overall positive in the medium-term.

Although normalisation is on the way, we believe that inflationary pressures will ease later this year, which should translate into less hostile policy action, notably from the Fed. Indeed, we expect an easing of supply bottlenecks, a normalisation in demand, and strongly doubt that prices will surge as much as last year. Economic growth should remain healthy and as the risk of an inflation surprise recedes, we expect growth oriented assets to continue delivering attractive returns, despite some increased dispersion. In the very short term however, the rhetoric surrounding the future of monetary policies has overshadowed the risks posed by the Covid pandemic, which marks a clear shift in the risk / fear factor.

The single largest market driver this year has therefore been the Fed re-pricing. Bond yields have rallied sharply, with US 10yr yields rising over 25bps since the start of the year, reaching 1.9%. German 10yr yields, in negative territory since 2019, turned positive last week. US 10yr real rates are also significantly higher, currently around -0.6% from a low of -1.05% at the end of December 2021. The start of the move is similar in magnitude and dynamics to those experienced in previous episodes of large spikes in 10yr real yields. Figure 1 clearly illustrates this below, comparing previous events such as the 2013 taper tantrum, the 2016 inflation episode following Trump’s election, last year’s reflation, or the 2018 Fed Powell tightening. However, according to our analysis, the move should be approximately 60% done now, which means that we have probably not yet seen the “peak of hawkishness”. 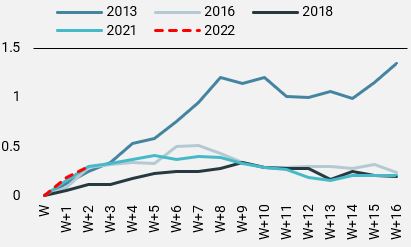 Equity markets have struggled with large rotations out of growth stocks and into value. If markets do not recover before the end of the month, only two episodes in the last 15 years will rank as badly for US growth stocks in January – 2016 and 2008. On the other hand, commodity markets have risen sharply from their December 2021 levels, led by the energy sector. These markets have benefitted from a rising geopolitical risk premium, as ongoing tensions between the West and Russia on a potential military conflict with Ukraine would further imperil Europe’s ongoing energy crisis. The Middle East is also experiencing a rise in geopolitical tensions, with Yemen’s Houthi fighters claiming to have launched a drone strike on the UAE last week. The receding Omicron threat has also alleviated concerns about the negative demand impact for energy, as restrictions imposed by various countries only had a limited effect at this stage. Fears of rising inflation also incited investors to continue to buy into the commodity story as a hedge. Another tailwind has been the US dollar, which started the year on the back foot. Many commodity markets remain tight with depleted inventory levels and ongoing supply chain disruptions. This is bound to change however, as increasing supply in energy and industrial metals should come to the market in 2022, which in turn would play into our cooling inflation narrative. Seasonal factors may also cause certain commodity markets to naturally retrace lower or at least consolidate, as we emerge from the cold winter months. 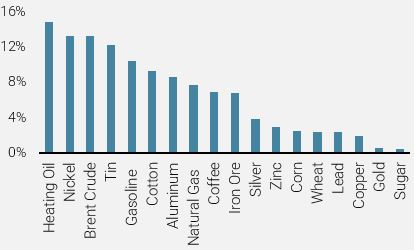 US dollar price action has been interesting so far this year. In theory, a hawkish re-pricing driven by the Fed should have made the US dollar appreciate. This however, did not materialise. In fact, EM FX has appreciated sharply against the greenback across the board, with the exception of a few currencies, such as the Russian Rouble (RUB), given its rising geopolitical risk premium. The dollar’s performance against G10 was more dispersed but largely disappointing, with the DXY overall flat year-to-date. We believe that the dollar’s performance has been heavily affected by long positioning into year-end / early this year,  resulting in some unwinding from investors and CTA’s. Given the extent of these moves, we could see further US dollar supply in the short term. In addition, the underperformance of the US equity markets so far this year has generated a negative headwind for the dollar, as funds are repatriated to the benefit of some value tilted stock indices, such as the Eurostoxx. To a certain extent, there is little tightening priced within the G10 (except for Norway and the UK), leaving some central banks prone to a shift in sentiment, such as the ECB, Sweden and Switzerland, compared to the Fed, where hawkish expectations had been building for some time. We could therefore also see a shift from these more “patient” central banks, which would benefit their currencies at the expense of the USD. 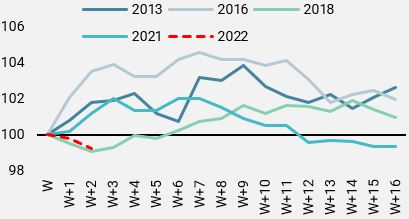 The above chart shows a clear divergence in US dollar price action so far this year. It is much more similar to that of 2018, when the Fed started tightening.

We are experiencing a shaky start to the year, which has led us to reduce our overall beta exposure and to travel light in the short term, as we deem the current environment to be unfavourable for our core convictions and views. As mentioned above, when comparing the start of this year to similar past episodes, the current Fed re-pricing might have more room to run. The magnitude of the move surprised us, as we considered year-end normalisation pricing to be fair, notably for the Fed. For now, central banks remain the key driver for markets, marking a clear shift away from the Omicron fears that prevailed towards the end of last year. The risk of a policy mistake has therefore increased. We continue to believe that the peak in inflation is in and that this eventually will encourage central banks to take a more moderate approach to normalisation. Given that current macroeconomic dynamics remain favourable, the market should be able to handle higher yields, and we remain positive over the medium term. In the short term, we will monitor the situation closely and look for the right time to re-engage our core convictions. 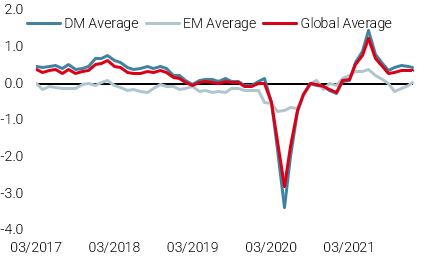 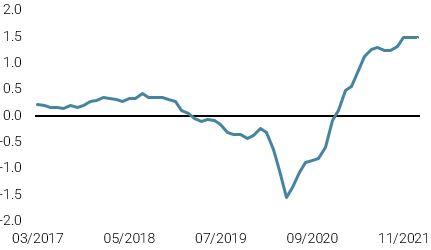