Home / Insights / Market Views / Are Rising Yields To Be Feared?

Are Rising Yields To Be Feared?

The asset class that has caught investor attention so far this year has been government bonds, as yields stir after months of sleep. The theme of reflation and inflation has taken centre stage and fears of higher interest rates have resurfaced. The unprecedented conjunction of protracted fiscal and monetary stimulus with strong growth recovery prospects point toward higher sovereign yields with potential implications for other asset classes. What is the trajectory and the consequences of rising rates on financial markets and are investors right to be concerned?

The macro context should lead to higher yields…

Yields on government bonds dropped dramatically in 2020 following the global macro shock that stemmed from the Covid-19 crisis and the paralysis of the global economy. Demand for safe havens weighed on long rates while central bank action pushed short-term rates down to or below zero in most major developed countries. Yields on US and German 10-year bonds dropped 130bps and 70bps, respectively. This reflected dampened growth and inflation expectations, as uncertainty around the length of the pandemic and its impact rose.

As the economy healed and most assets recovered on the back of improving prospects for earnings, defaults and activity overall, a great disconnection occurred between the pricing of the economic recovery for risk assets and government bonds. Inflation expectations surged, sending breakevens to or above their pre-crisis levels, but nominal yields did not follow through and real yields dipped deep into negative territories for the first time since 2012 in the US and to unchartered territories in Europe.

The growth premium is now starting to appear in government bond pricing and accounts for about half the increase in yields this year, with real rates picking up. Our view is that this trend ought to continue in 2021 but remain constrained. Our central scenario at the beginning of the year was for US 10-year yields to reach a range between 1.25% to 1.5%, 50bps higher than late 2020. In our opinion, any rise further will be capped by central bank willingness to keep long rates under control (to prevent debt financing costs from becoming too onerous) and investors’ renewed interest in the asset class as carry becomes attractive again in safe heavens.

Currently, the total carry on US 10-year bonds has risen to 2.3%, which is higher than what investors could earn in investment grade credit through the second half of last year. The intercountry spread between the US and the rest of developed economies where the pressure on yields remains more muted has become attractive, which could in turn be positive for the US dollar and reduce imported inflation. In addition, the recent move has helped to reduce the extreme long positions that systematic strategies such as trend followers have held up until late last year. Nevertheless, as there is still room for rates to move higher, should investors be concerned about the potential implications for other asset classes?

… but the impact should remain limited

Historically, rising yields have not necessarily led to losses in other, riskier asset classes. Intuitively, higher interest rates are a consequence of an improving macroeconomic context. In spite of higher financing costs, growth-driven rises in yields are a supportive environment for both equities and credit as earnings expectations improve and default risk moves lower.

Over the last 20 years, surges of 50bps or more in 10-year yields have been followed by above-average returns in growth-related assets. Since 2000, the average performance of the S&P 500 in the six months following such a rise in yields has been positive, up 4.5% and above the 3.8% average six-month returns. In terms of frequency, over the last 20 years, only two out of seven meaningful long-term rate surges lead to negative returns: in 2002 with the bursting of the Dotcom Bubble and in 2011 during the Sovereign Debt Crisis.

Arguably, it is not just the magnitude, but also the pace of the increase of the rise that matters, as well as the absolute level of rates. Empirically, neither of these two other factors impact future expected returns negatively. What does matter, however, is the path of short-term rates, controlled by central banks rather than market participants. On this front, the rhetoric of major central banks has been clear enough to provide visibility for two years ahead, and the expected yield rise will most probably take the form of a normalisation in yield curves, which is beneficial to certain sectors, like the financial industry. The question of yield curves control has been discussed by the Fed and the ECB, and is already in place in Japan. Unless there is a meaningful overshoot in realised inflation above central bank targets for a prolonged period of time, accommodation is granted and a lift-off in rates is off the table.

As mentioned in our previous publication, the reflation theme has gained traction over recent weeks and raises questions about the continuation of the rally observed in the later part of 2020. Yes, the long-end of yield curves are set to normalise, but the rise should remain constrained and the impact on other assets will likely be neutral to positive.

However, we believe that other risks could temporarily materialise, mostly affecting sentiment. It seems to us that the scale of the latest leg of the rally is approaching exuberance levels. Good news on the health front, the vaccine campaign and fiscal stimulus have pushed 2021 earnings expectations and credit spread compression into “priced for perfection” territory. Q4 earnings season will start soon and room for disappointment has increased as 20%+ profit growth is already anticipated this year for the MSCI World, and more than 30% in Europe. Valuations are becoming stretched, with most major equity markets in the top decile, if not percentile, in terms of expensiveness and inflows sustained until late 2020 or early this year. In credit, spread compression to pre-crisis levels is reflective of fundamental improvement and is yet another area where the reflation theme has been strong. Even if the norm is for spreads and rates to be negatively correlated, the current pricing in credit could dampen this relationship and the spread response to future rises in yields could become more muted.

In short, sentiment and valuations are the elements at risk now that the improvement in macro fundamentals has been discounted by the investment community. The two main visible risks to risk appetite over the short run are a possible disappointment over the size of fiscal stimulus in the US and the vaccination campaign falling short of expectations, as well as mounting doubts with regards to vaccine efficacy or casualties, as it appears to be the case in Norway.

Hence, despite the lack of major worries concerning the impact of rising yields on other financial assets, our positive tilt toward growth-oriented risk premia has been reduced temporarily, taking into consideration the imbalance in risk reward for these assets as valuations become stretched and sentiment shows early signs of complacency. 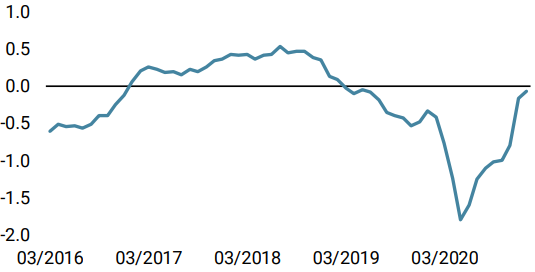