The macro situation is bad but shows increasing signs of stabilisation. Despite investor bearishness, markets have rallied since March 23, partially thanks to central bank interventions, which achieved three things: limiting tail risks, lowering longer-term rates and pumping cash into the markets. Some might say equities are expensive, but we think this is open for debate. First, if markets overcome the macro shock, this would imply that current equity levels are consistent with past recoveries following recessions. Second, the concentration of equity indices hides an overall more balanced valuation picture. In light of these elements, we are progressively moving from a neutral stance to a selective exposure to growth assets.

The macro situation plays a significant role in our dynamic allocation process. We monitor it through different indicators like our Growth and Inflation Nowcasters as well as higher frequency indicators such as our “Newscasters”. The main conclusion from these indicators is that the macro situation is bad (our World Growth Nowcaster is at -2.87 standard deviations, our Growth Newscaster at -1.25) but has stabilized. We even see signs of improvement: 69% of our Newscaster data is improving while 61% of the Chinese data we are looking at are also trending higher. The passage through such bottoms has usually led to the end of bear markets.

In February 2009, our World Growth Nowcaster made a bottom. Thereafter, in March 2009, the S&P500 rallied by 8.54%, triggering a 7-month uptrend in equities. In 1990, this sort of rebound occurred 4 months before the world had reached a bottom in macro terms (market low November 1990, macro low February 1991). In October 2001, macro and markets bottomed together, leading to a three-month rally, which ended in a double dip. The magnitude of these post-crisis rallies varies from +10% to +36%, the former representing 2001 and the latter 2009. In 1990, equities recovered by approximatively +25% from their initial shock.

The data seems to convey two key messages. First, there is a connection between the moment the economy stabilizes and when the markets recover. Second, the larger the scale of the economic downturn, the stronger the recovery that follows. Since March 23, the S&P500 recovered by 32%, the Eurostoxx by 17% and the MSCI All Country World Index by 28%. These numbers compare well to the past 3 recessions and especially to 2009 situation. If macro conditions were indeed on the verge of improving, the scale of this rally would not be surprising, especially given the depth of the equity decline. What is surprising is that this recovery happened in a quarter of the time it usually takes.

Central banks have quickened the pace of the recovery

The rally partially reflects the rapid action of the Fed and the ECB. With its statements and swift increase in its balance sheet size, the Fed probably accelerated what markets would naturally do when the economy bottoms. The Fed has influenced the markets in three ways: first by cushioning tail risks and defaults in the markets (lowering risk aversion and therefore credit spreads), second by lowering government bonds yields (discount factor impact) and finally by injecting liquidities that need to be invested.

A large portion of the current rally can be explained when running a regression between the S&P500’s returns and changes in 10-year yields (discount factor effect), changes in investment grade spreads (tail risk effect) and changes in the size of the Fed’s balance sheet (liquidity effect). 10-year rates in the US are 90 bps lower than in February, IG (cash bonds) spreads about 135 bps lower while the Fed’s balance sheet is now significantly larger (up 70%). The combination of the three factors yields an expected increase in the index of 24.4%, which corresponds to about two thirds of the current recovery. This regression performed over the 2007-2020 period yields an R2 of 31%, signifying a meaningful relationship with respect to traditional macro-finance academic literature. Since we expect this combination of factors to remain in force for some time, this 25% increase is likely to prevail, which makes the 2’800 level a potentially solid support for the S&P500 if the market were to retreat from current levels.

With the macro situation stabilising combined with the Fed’s three-pronged impact on financial markets, the question of valuations now becomes essential. When considering forward-looking valuations (notably based on the next 12-month earnings), equity indices look incredibly expensive: Price-to-earnings ratios are at their historical 99th percentile for the MSCI World, the MSCI Emerging and the S&P500. This may explain the ongoing bearish positioning we observe for many market participants: equity long short strategies, macro funds and CTAs all have a historically low equity beta. It is even negative for the last two. Equity valuations may be one of the factors explaining their defiance.

We think these valuations metrics should be taken with a pinch of salt for one main reason: we have seen indices rally amid high concentration. Just 20% of stocks on the NYSE have closed above their 200-day moving average, while five stocks make up nearly 25% of the S&P500 index, the FAANGs. This means that the higher “P” in the PE ratio is indicative of an uneven rally. When comparing the year-to-date performance of the equal-weighed S&P500 to the index itself, a clear discrepancy subsequently appears. The index has lost about 20% while its equal weighted counterpart is still down by 36%. Thus focusing solely on market cap indices may distort future earnings expectations as seeming more optimistic than they actually are. If we still think that the “value” rally is not for tomorrow (we need the economy to strengthen further), the expensiveness of stocks should be reconsidered given this double concentration effect, which may blur the valuation picture.

Moving from neutral to a selective growth exposure

Our dynamic allocation is progressively moving from neutral to opportunistically positive on selected growth-related securities. For now, our strongest convictions are an overweight in government bonds, investment grade credit, emerging market equities and precious metals and an underweight in cyclical commodities. We are overweight in “quality growth” equities, mainly via the Nasdaq and the SMI, as a way to gain exposure to an improvement in the growth situation. For now, we do not think valuations should be of investors’ primary concern as the macro situation stabilises and central banks actively cushion the extent of the financial damage. 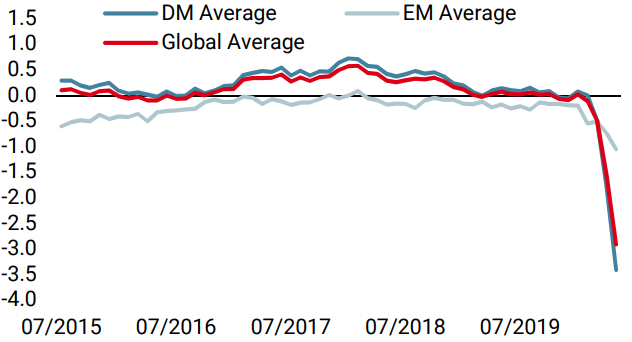 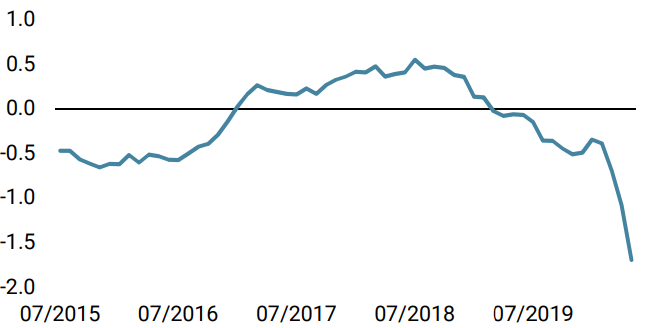