China: Too Uncertain To Turn Positive

Growth in China continued to slow sharply in Q3. Indeed, GDP grew by just 0.2% quarter-on-quarter, generating a year-on-year increase in activity of only 4.9%, the weakest growth rate outside the recession. Many factors explain this weakness. Some are cyclical, such as the rise in commodity prices, which has had a significant impact on manufacturing activity, while others are structural, such as the government’s desire to redirect the engines of the economy towards the domestic market in order to reach its ambitious “common prosperity” goal. What are the impacts of this situation on growth and asset allocation?

China’s slowdown is not over…

In 2020, China rebounded much faster than most other countries thanks to very strict containment measures. Chinese activity also benefited from both a rebound in domestic demand and its central position in the global supply chain as global trade picked up that summer. Since this rebound, the Chinese economy has slowed significantly. Our Growth Nowcaster indicator for China has been in negative territory for several weeks, indicating that current activity is growing at a lower rate than its potential (Figure 1).

This negative dynamic is the result of two important factors:

1. Cyclical – rising commodity prices: because of its size and place in global trade, China is the largest consumer of commodities. It is therefore natural to see its economy affected the most by the significant rise in the price of energy and industrial metals. As a result, production levels have fallen due to power shortages and power control. Industrial Production fell in September, dragged by a slowdown in energy intensive sectors. Since May, the production component of our Growth Nowcaster has fallen the most (Figure 2), increasing the bottleneck effects.

The rise in commodity prices has also impacted the profitability of the most power intensive sectors, as reflected by the significant rise in PPI over the past year and its spread with consumer prices over the same period. This spread, which can be a good proxy for margins, has deteriorated significantly (Figure 3), affecting investment prospects and potential growth.

2. Structural – changes in the engines of growth: the new doctrine of the Chinese government, summarised by the mantra “common prosperity”, aims to rebalance the sources of growth from external to internal and to increase the level of redistribution, i.e. to reduce inequalities. This translates into a policy of decarbonising industry to increase internal services and household consumption. The wish to control what is seen as the “oil of the 21st century” – data – has triggered tighter regulation of certain technology and tutoring companies as well as a reduction in the leverage of real estate developers. While this trend can be perceived as positive because it provides greater stability for future growth, its short-term impact has been negative.

This combination of cyclical slowdown and structural, political and industrial changes has resulted in a significant adjustment in Chinese asset risk premia. Whether at the sector or country level, the repricing has been significant and a source of strong underperformance. Figure 4 highlights the magnitude of this adjustment in terms of China’s CDS level, which has risen by 22 points since the end of July, as well as in terms of high yield corporate interest rates and the equity market, which has a relative performance to MSCI US of -18% in Q3 and -27% since the beginning of the year.

Figure 4: Performance of High Yield and Equity in China 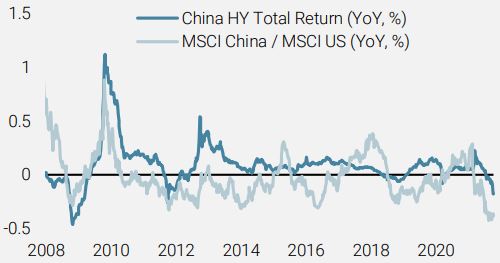 It is also important to note the very low contagion to the rest of the world’s assets. Unlike the summer of 2015, the decline in Chinese growth and growth assets have had a limited impact on other financial markets. High yield credit has remained stable in Europe and the US relative to Chinese corporate credit, while developed market equity indices continued to rise in October despite the deteriorating economic situation in China. This situation reflects, in our view, the limited positioning of global investors in Chinese assets.

Is this enough to become positive on China?

In July, as the deteriorating economic situation began to materialise, our view was negative despite the policy mix tools available to the Chinese authorities to fix issues and support its economy. At that time, we were waiting for an improvement in the momentum of the China Growth Nowcasters before considering a tactical return to Chinese growth assets1. Three months later, while the correction in financial assets has continued, making them even more attractive relative to other emerging and developed countries, the economic situation remains deteriorated. Despite reassuring rhetoric from the authorities, the size and past contribution of the real estate sector, which represents 25% of GDP, makes a short-term rebound in activity uncertain. Above all, the current industrial policy choices will weigh on potential growth and on expected returns as 1) the leverage of the economy will be reduced via the regulation of the real estate sector, and 2) the energy intensity that has increased sharply with the development of data centres, 5G and electric vehicles will be confronted with rising energy prices and the lack of sufficient alternatives. Overall, we see the separation between macro and industrial policies as a source of transitional pains in the near term.