Uncertainty is Back: Caution Required

Will the persistence of the Delta variant change central bank normalisation schedules? In line with the Central Bank of New Zealand, which has delayed raising rates following the country’s new lockdown, the Fed chairman Powell tempered market expectations at the much-anticipated Jackson Hole symposium last week by highlighting continuing macroeconomic risk. Is the reflation theme that has been driving asset, sector and style rotation behind us? If we continue to see inflationary pressures in the coming months, the strength of global growth, meaning its second derivative, could be weaker than expected if the US and Europe do not win the vaccination race.

Pricing U-turn: from global expansion to a durable slowdown?

On the surface, the signs appear rather encouraging and positive. Global equities delivered another consecutive month of gains in August, the seventh in a row, despite a rise in Delta variant cases and less robust macroeconomic figures. However, the more technical elements point to another conclusion: a downward adjustment in growth and inflation premia.

1) Significant in its magnitude: We are talking about relative sector performances of more than 10% within stocks, cumulated over the months of July and August. The Energy sector, which had one of the best performers over the first two quarters, corrected by 3% in August and by 9.5% since the end of June, while the Utilities sector rose by 4% and 7% respectively over the same periods. This reversal was also significant in terms of styles, where Quality and Low Vol significantly outperformed Value in August and since the end of June.

2) Broad-based: It can be observed across asset classes. In the equity market, defensive sectors have largely outperformed the most cyclical sectors. In the bond market, rates have fallen by around 20bps for the main developed countries over their 10-year maturities, generating a flattening of the 2/10 curve of the same magnitude. In the currency market, the dollar has strengthened significantly against all currencies and defensive currencies such as the JPY or CHF have appreciated against the more cyclical and emerging currencies. While the commodities market was relatively unaffected by this repricing until now, the last few weeks of August also marked a change in perception, leading to a significant correction in the most cyclical commodities such as oil and copper. Faced with this reversed rotation, two questions arise: 1) Does it reflect a change in fundamentals? 2) Does it mark the beginning of a new trend? Regarding the macroeconomic elements, our Nowcasters show a deceleration in China and the US, but still very strong growth in Europe.

Source: Unigestion, Bloomberg, as of 27 August.

The components linked to Consumption are the most important factor in the decline of our US and Chinese indicators (Figure 1). These elements tend to validate the asset allocation movement observed since late June. However, the risk of inflation, as measured by our Inflation Nowcasters and Newscasters, remains very high (Figure 2). Supply and Demand components remain at very high levels and show no signs of decelerating significantly. Combined with rising employment numbers across the board, these factors seem to contradict the downward adjustments to the growth and inflation premia contained in asset prices. 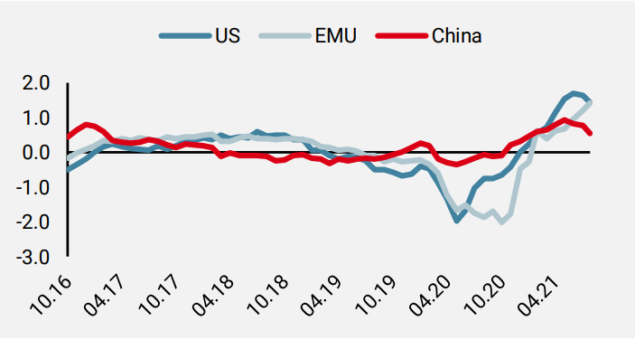 The other key element to monitor is the monetary support. Like the central banks that were earliest in their guidance to reduce support, such as the banks of Canada, Norway, New Zealand and England, but which have not yet implemented this reduction, the Fed is staying the course but remains cautious around timing as reflected in J. Powell’s speech on Friday. From our point of view, the Fed remains dovish and remains an element of support for risky assets in general and for real and cyclical assets in particular because the bank’s patience will allow stronger and more sustainable growth. Tapering is on the horizon but will be gradual and well telegraphed. Above all, while Fed flows are set to decline, the Fed’s stock remains colossal: 37% of GDP versus 20% in June 2013 and 15% in March 2009.

Sentiment: From bullish to neutral stance?

Our market sentiment tracking incorporates different dimensions: positioning, risk aversion and risk reward, comparing momentum versus contrarian bets. Whatever the indicators – VIX curve, skew, the beta of hedge funds to the main asset classes, or the distribution of expected returns contained in options – the message remains the same: bullish sentiment has been reduced or even transformed into a defensive stance according to some indicators. The VIX curve has shifted upwards by 2 to 3 points between the end of June and the end of August, skew has increased for the S&P 500 index and the net and gross leverage of hedge fund long/short equity positions has decreased significantly. Our Market Stress indicator is therefore fluctuating between “low” and “neutral” risk, having remained at “very low” for the first six months of the year. These elements confirm that investors are entering the last months of the year with caution, or even defensively. This is illustrated by the carry embedded in the volatility complex, which measures the difference between implied volatility and realised volatility, as well as the gap between the spot VIX and the first future contract, both of which remain historically high for periods of strong growth and large monetary support.

Where could the surprise come from in September?

The confrontation between what is expected and fundamentals on the one hand, and an analysis of the probability of occurrence assigned by the market to the central scenario versus the cost of playing the alternative ones on the other hand, allow for a precise and disciplined evaluation of what is already priced in and what could surprise. It seems clear at this stage of the cycle that the scenario of a macroeconomic slowdown, reducing the tail risks associated with a sustained inflation shock, has become the base case for investors. In this context, and given the relative correction in cyclical and real assets observed since the end of June and the negative pricing of the impact of the Delta variant on the global economy, it seems obvious that the expansion scenario, which could be a source of inflationary pressure, would be a surprise. In this context, we believe that a significant overweight to US equities combined with a pro-dollar position against the most cyclical, developed and emerging currencies is a good combination. These exposures will likely benefit from 1) the favourable environment for risky assets and 2) attractive valuations in cyclical assets that should significantly outperform in the event of a repricing of the growth and inflation premia, which we believe will exceed consensus expectations in the coming quarters. 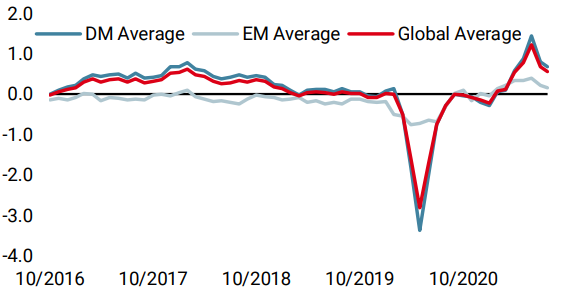 Uncertainty is Back: Caution Required