Focus on the Long-term Factors, Look Past the Hurdles

Equity markets have resumed their progression since 25 September. This recovery seems to be due to Joe Biden’s advance in the polls, as he is perceived by markets as the most likely to be able to push through a new stimulus package for the US economy. But is this stimulus really necessary to remain positive on equities? If we look back at the 2008-2009 period, the current global stimulus (monetary and fiscal) seems sufficient, and its combination with the expected contraction in savings should provide strong support for improved corporate earnings. We see a strong argument for remaining overweight equities. The fiscal package will no doubt be in the candidates’ speeches, but the speechless recovery should be a surer driver of equities in the midterm.

Markets are rising in expectation of further stimulus

Over the past three months, a growing connection between stock market performance and voting intentions for Joe Biden has begun to dominate financial markets. This relationship became increasingly evident from 25 September when markets rebounded as voters expressed a growing readiness to elect Biden. What seems to explain this relationship is the fact that a Democratic takeover in the US would help open the door to a new wave of stimulus. With the Fed keeping long rates lower for longer, this new stimulus of about 7% of US GDP (USD 1,200bn) would be a boost for future dividends of US corporations. Unsurprisingly, the Russell 2000 outperformed the S&P 500 by 5% between 25 September and 8 October. Markets have recently shown a particularly strong sensitivity to both fiscal and monetary stimulus. No stimulus, no returns on equity markets?

To answer this question, let’s compare 2008 and 2020 figures. First of all, the contraction in GDP of developed economies in 2008 was -4.2% while the expected contraction in 2020 is between -7% (MFIs) and -6% (private economists) for developed economies. Thus, the Covid shock should represent a little less than twice the shock from the 2008 crisis. It is also a shorter shock in time, as the 2008 recession lasted from December 2007 to June 2009 (i.e. 19 months). The Covid crisis began in February and ended at the end of August, according to our World Growth Nowcaster, so it is a seven-month shock. The shock of 2020 is thus 50% larger than that of 2008 but will have lasted half as long. It’s a significant shock, without being a true multiple of 2008.

The magnitude of the stimulation is unparalleled

The magnitude of the fiscal stimulus clearly distinguishes the situation in 2008 from 2020. While in 2008 all the tax packages and automatic stabilisation mechanisms led developed economies to a 4.6% deficit, in 2020 this figure has increased significantly: according to economists’ expectations, the size of the budget deficit in developed countries should be around 12%, an unprecedented figure. The ratio between this figure for 2008 and 2020 is thus 1:3. The economies of these countries are therefore more than proportionally stimulated than in 2008. In addition to this fiscal stimulus, monetary stimulus is also unprecedented: not only will short-term rates remain close to zero in the G10 for at least two years, so will long-term rates. For example, the 1% drop in long rates in the US should add +0.6% to US growth in 2020, according to the historical relationship between the two aggregates. What’s more, this decline in rates is durable: while rates tended to rise after 2009, in view of the additional debt linked to Covid, it seems rather unrealistic to expect such an increase. The cost to some governments of a 1% increase in these long rates could wipe out the stimulus generated by public debt during this crisis. Record spending on the one hand and a cost of money at its lowest level for a long time to come: these are two sources of stimulus for economic activity that clearly surpass the 7% additional tax package in the US.

Household savings as a pool of growth

The evolution of the savings rate in 2008 and 2020 offers another point of comparison. In 2008, savings in the US briefly rose by USD 300bn, an 80% increase in a few months, but this must be put into perspective. This increase in savings corresponded to only 2% of US GDP, or a little more than USD 1,000 per capita. In 2020, savings increased by up to 434%, or 18.6% of US GDP and USD 12,500 per capita. In 2008, savings declined rapidly to enable American households to overcome their financial difficulties and it should be the same in 2020.

All developed countries seem to be in a comparable situation: between 2008 and 2009, aggregate savings in developed countries eventually declined, falling by about 3.5% of the GDP of developed economies. In 2020, savings exploded in developed countries: it grew by 2.5% of GDP, or more than USD 1,000bn. Households will be able to draw on this manna to cushion the shock as they did in 2008: this is a direct stimulation of economic activity for an amount twice as large as the potential second US stimulus. Anecdotally, the US household savings rate was 34% in April, but only 14% in August.

Despite the reality of these figures, the market’s attention has focused on anticipating this additional fiscal stimulus. In view of the figures previously listed, however, it does not seem critical for the economy to continue its recovery. As the recovery progresses, the “E” in “P/E” will continue to normalise. The next season of earnings announcements should put an end to pessimistic expectations, translating into tangible figures the extent to which the recovery is underway, combined with the productivity efforts made by many companies in recent months. Nevertheless, if we believe the famous Public Choice school, it seems natural that the confrontation between the presidential candidates should hinge around the problem of the deficit. Outgoing presidents are historically judged on their economic record. If Mr. Trump fails to make the stimulus package a success before the elections, the benefits will fall to Mr. Biden, and that is what the market seems to think recently. For now, we remain convinced that growth will be stronger than expected, with or without additional stimulus, providing essential support to equity markets. This of course comes with the condition that the pandemic situation does not go out of control, as another lockdown period would clearly take its toll on the economy implementing it. Assuming that risks remain risks, growth should find its way. 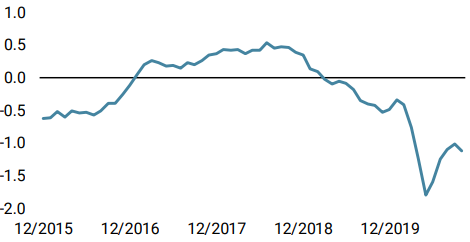 Focus on the Long-term Factors, Look Past the Hurdles