From a Narrow to a Broad-based Recovery

Thus far, June has seen a continuation and acceleration of the themes observed in April and May: an improving macroeconomic situation and fast-recovering investor sentiment. Newsflow on the pandemic has materially improved, economic data is less negative and a shift out of safe assets into growth and inflation-related assets is gaining momentum. Compared to the last few weeks, the rally seems broader-based, taking the shape and form of a more traditional recovery driven by a “risk on” event, with most risk assets thriving at the expense of hedge assets.

Economists are expecting 2020 to be a recessionary year, with a severe worldwide economic contraction. The April 2020 IMF WEO report puts global GDP growth for this year at -3%, with significant disparity: in the US, this number becomes -5.9%, -9.1% for Italy, -7.2% for France and -6.9% for Germany. Yet, we see a light at the end of tunnel as, for markets, the direction of the macro trend matters more than its current level. Across the different point-in-time indicators we are looking at, we see reason for hope. First, our Newscaster, which turns economic growth-related media newsflow into a growth barometer, has been reflecting an improvement for some time now. Currently, its diffusion index, which measures the percentage of improving underlying data, has reached about 70%. Our world Growth Nowcaster, which does the same purely based on economic data, has recently started picking up on this improving trend: its diffusion index has seen a rapid increase, from sub-30% levels to around 50% now. In the US and in the Eurozone, the majority of economic sectors are now showing similar signs of recovery.

Last Friday’s job report is the perfect example of how markets could be surprised by the pace of the recovery: economists expected 7.5m job losses in the US but the US economy managed to create around 3m new jobs. Economic surprise indices show that this improvement extends well beyond employment yet most economists still do not expect a V-shaped recovery. Investors should keep in mind how the pace of the recovery reflects the unprecedented scale of the fiscal and monetary policy response implemented to ensure a rapid come-back of activity. Last week, Europe made another step into that “growth support” direction, increasing the size of its fiscal spending (EUR 750bn+) and its monetary policy support, with ECB President Christine Lagarde announcing an additional EUR 600bn to the bank’s pandemic-related PEPP programme. No wonder our “central bank heartbeat” – an indicator turning central bank statements into a measure of dovishness – continues to indicate an extreme level of accommodation: this combined support is here to stay. So far in June, markets have reacted very positively to this improved growth situation, with a significant recovery in sentiment.

In recent weeks, participation in the rally has been limited to specific segments of growth assets: quality stocks, technology names and high quality credit. However, with confirmation that the health situation is stabilising, improvements on the macro front and renewed support from central banks, risk-taking has spread across financial assets more broadly. Laggards have outpaced early winners and safe havens suffered their worst week since the end of March. The MSCI World Value index delivered one of its largest outperformances versus its Growth counterpart in years, returning 8% and 3.2%, respectively. The Euro Stoxx 50 jumped 10% over the week, as did the oil 1st future contract, sent higher by the combination of improving demand (the global economy resuming activity) and supply (extension of production cuts). In credit, US high yield returned 5.7% while the S&P 500 delivered “only” 3.1%, buoyed by rising energy prices and lower anticipated risk of defaults.

In FX, high beta currencies remained bid up, especially in emerging markets, pushed higher by systematic strategies getting squeezed out of their previous shorts, while the US dollar, the Japanese yen and Swiss franc sold off. Government bonds lost 1% globally, with 10-year yields 20bps higher on the week in most major economies. Inflation breakevens continued to gain traction, highlighting that expectations implied in both growth and inflation premiums are being repriced. This is quite a change from the earlier legs of the rally when recession fears remained anchored in defensive assets.

This week, the FOMC meeting could be a key driver of sentiment. Particular attention will be paid to any changes in unconventional monetary policy measures and the economic outlook. The latest statements from Fed members indicated the need for even greater clarity in terms of forward guidance, even though the central bank could wait until September to do so, allowing time to fully grasp the effects of the COVID-19 pandemic on the real economy. We stand by the belief that the Fed is ready to do more if necessary, at any time, to prevent any disappointment on both Wall Street and Main Street.

Adapting positioning to this evolving environment

As the shape of the recovery evolves, so does the appropriate dynamic positioning. In our opinion, the various rotations observed above and below the surface have room to reverse further. A constructive view on the recovery calls for an increasing tilt toward growth-related assets, reduced short exposures to real assets and a reduction in defensive plays such as government bonds. Indeed, sovereign paper is increasingly falling out of favour, with systematic and trend-following players offloading more and more rapidly. This could pose a risk to diversified strategies in the near future, despite central bank buying. Moreover, a large repricing in rates would push equity valuations meaningfully higher and endanger the current strength of the rally. Finally, as volatility has dropped to its lowest levels since early February, driving the cost of hedging lower, we believe now is the appropriate time to monetise upside optional structures, which have helped to materially improve participation in the rally, and to implement convex protection to cushion potential short-term reversals in sentiment. 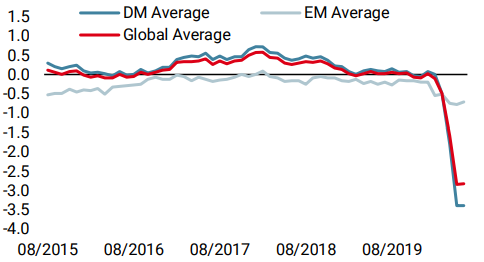 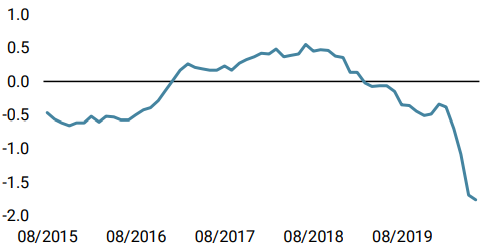