Credit risk returned to the forefront last week as concerns around China’s beleaguered real estate giant, Evergrande, prompted risk premia to adjust across the board. However, monetary policy remained at the centre of the game with key central banks meeting, including the Fed. Unsurprisingly, Fed tapering will be gradual and disconnected from the rate hike schedule. More importantly, the Fed maintained that the current inflation shock is transitory and should normalise in the coming months. However, the Fed’s expectations have yet to be validated, both by realised inflation and households and businesses that perceive the situation as lasting. In the famous “Fed reflectivity game”, whose expectations will be the most influential?

Many central banks held their September meeting last week: the Fed but also the BoJ, the BoE, the SNB, the Riskbank and the Norges Bank, which hiked rates first among the most traded currency markets. While there remains significant divergence in normalisation schedules and reduction of the accommodative bias implemented to smooth the negative effects of the lockdown, one message remains unanimous among central bankers: the transitory nature of the inflation shock. The rebound in commodity prices, the shortage of certain goods and components, and the friction in the labour market, where there is a high level of job vacancies and unemployed workers, are all seen as cyclical and temporary, linked to the exceptional Covid situation and not driven by structural factors, reflecting an economy undergoing profound change. However, the Fed, like the OECD or the ECB recently, has revised upwards its inflation projections once again. This upward adjustment concerns mainly 2021, with an adjustment of 2.4 inflation points between the December 2020 meeting (1.8%) and the one last week (4.2%), but also 2022 and 2023. Did someone say “transitory”?

2) “supply shock inflation”, which is caused by a drop in available goods resulting from a climatic, technological, geopolitical or other shock;

3) “built-in inflation”, which reflects the interaction between economic agents, who will try to compensate for any real or expected future price increases by raising wages for households or prices for businesses. This factor, also known as the “price/wage spiral”, is strongly linked to inflation expectations.

The household message: A drag for higher demand

In this context, and even if the rise in Delta variant cases was also a negative factor, the sharp drop in US household confidence reflected by the Conference Board and the Michigan University survey appears consistent and understandable. The most important factors in the CPI – Energy and Shelter – are both up sharply and are the main contributors to the rise in household inflation expectations. These increases largely explain the deceleration in our Growth Nowcasters’ Consumption component and the change in the second derivative of macro momentum between June and September.

The corporate message: A risk for earnings growth

Regarding supply shock inflation, the “Price Paid” and “Order Backlog” components of the ISM Manufacturing and Services indices are at their highest levels since 1990, demonstrating that the shock remains global and a source of risk for the future profitability of the companies and sectors concerned. This is because a scarcity of resources generates a double negative effect if the situation is prolonged: a rise in production costs and a reduction in volumes due to a lack of sufficient inputs to meet demand. The recent examples of FedEx lowering its projections for 2021 due to higher costs and transportation problems, or car manufacturers reducing their sales targets due to component shortages illustrate the magnitude of the phenomenon and how difficult it will be to normalise the situation within a few months. To illustrate this phenomenon, the Baltic Dry index is at its highest level since the 2008 financial crisis and up 230% since January. Transitory? Really?

The three components that determine Gordon’s “triangle” are all rising in our Inflation Nowcaster and display a diffusion index above 50, highlighting that a sharp and sustained decline in inflationary pressure is unlikely in the near term. As Figure 2 shows, this situation remains exceptional in its magnitude.

Figure 2: US Inflation Nowcaster by Components

Over the longer term: “Welcome to a world of scarcity”

We strongly believe that, beyond the cyclical effects associated with this inflationary shock, secular trends such as shifting demographics, technological innovation and globalisation that have pushed inflationary pressures and costs down since the late 1990s, will at best have a weaker effect in the future, and possibly even reverse. In a recent publication entitled “New narrative on monetary policy – the spectre of inflation1 “, I. Schnabel of the ECB points out that the decline in the growth of the working age population could act as a brake on investment, thereby reinforcing shortages.

Moreover, the Covid crisis and the need for energy and health independence will likely push states to repatriate a large part of their production from low-cost countries, mainly in Asia, to areas that are geographically and politically closer, redrawing relationships within global trade. The supply chain and the structure of the labour market will be durably affected. The demand for jobs in developed countries could thus accelerate sharply in the years to come and encounter shortages in terms of skills and availability, as illustrated in the recent Norge Bank policy report2 that compares the Beveridge curve for different periods. Figure 3 shows another curve, the simplified Philips Curve for different periods in the US and highlights the absence of any downward adjustment in wages in 2020-2021 despite the economic shock. While the period is too short to draw definitive conclusions, it shows that firms have had to maintain significant wage growth to retain their employees, temporarily reversing the negative causality between unemployment and wages.

Similarly, as reflected by the sharp rise in carbon contracts and the lack of investment in all fossil industries for reasons concerning ESG score improvement, the energy transition that will be the main determinant of growth in the coming decades, if not compensated by public subsidies, could also push up the production price of goods and services.

Historically, the Fed adjusts the stance of its monetary policy based on deviations of fundamentals from its central scenario, thus determining the expectations of economic agents. By maintaining its accommodative bias and presenting the inflation shock as transitory, the Fed seeks to anchor inflation expectations around its long-term target. Its credibility is therefore at stake in maintaining this causal relationship. Thus, if firms and households believe in the Fed and see this shock as temporary, they have no reason to adjust their consumption, investment and savings behaviour. Conversely, an expectation of a more lasting shock among households and businesses, or worse, a continuation of high realised inflation, could increase the level of uncertainty and generate precautionary savings, thus changing the Fed’s fundamentals and central scenario, pushing it to adjust its bias. If the Fed’s objective remains a return to full employment, the next labour report will be key to assessing any change in Fed monetary policy. The next inflation print will also be decisive in terms of giving credibility to the Fed’s scenario and validating the low probability it attaches to the “stagnation” scenario. Failing this, household and business expectations could determine those of the Fed members, thus reversing the relationship in the reflectivity game. 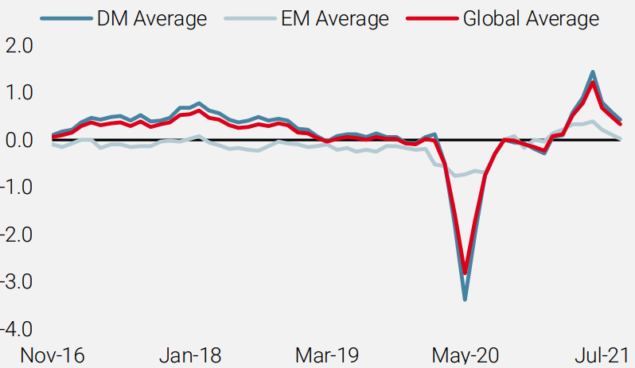 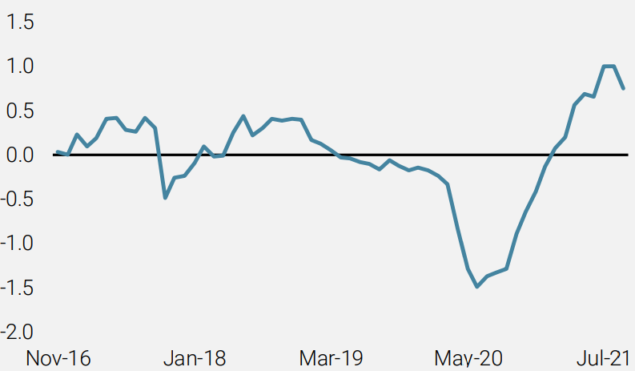 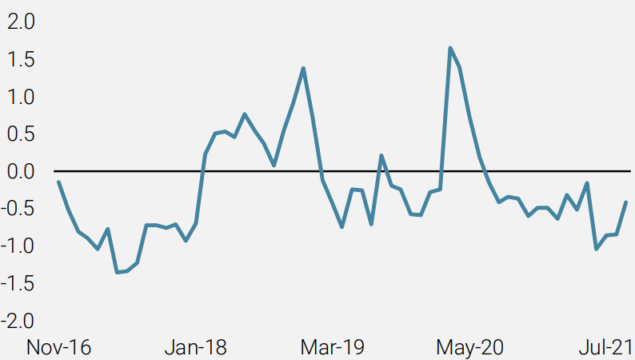