Home / Insights / Market Views / Is Stagflation Around the Corner?

The macro context has been changing fast lately. Over the past few months, a ‘goldilocks’ environment with record growth, supposedly temporary inflation pressures and highly accommodative central banks has turned into a slowing recovery with higher inflation and decreased monetary support. Risk assets have finally started to reflect this planetary misalignment. Increased macro and political uncertainties have begun to weigh on sentiment as investors try to assess whether these developments are merely a glitch in the macro matrix or if they could lead to a more concerning “stagflationary” backdrop.

What is the Data Saying?

Our proprietary Growth Nowcasters started decelerating in July, indicating that the recovery had peaked in June. The deceleration gained traction over the summer as a natural mean reversion from extreme levels; not so concerning per se, but the continuation of the downward trend caught investors’ attention in September, including ours. More importantly, the two major economies driving the trend are China and the US, which is far more worrying. The deceleration spiral sequence is following the same pattern as the post-Covid recovery: China, followed by the US, followed by Europe. Our Chinese Nowcaster has now turned slightly negative, indicating below-potential growth for the first time since January 2020. It took just three months for China to turn from an economy running above potential to the current level, so the next quarter will be critical to assess whether Chinese growth will stabilise around its long-term potential or if it dips further towards recessionary levels. The same phenomenon has been observed in the US, despite starting from a higher base. The pace of the slowdown has been meaningful: for the past two months, on average, 67% of growth-related data has deteriorated versus previous readings. The level of the US Nowcaster has dropped to almost zero, indicating that the US economy is now growing at its long-term potential. In Europe, it looks like growth peaked recently and will likely mean revert as well. 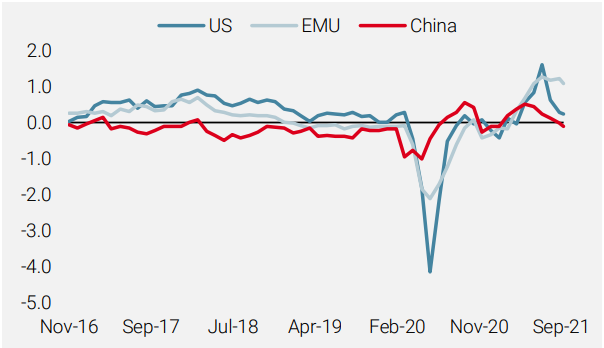 On the inflation side, higher pressures for longer now seems to be a commonly accepted expectation among market participants, less so by central bankers. Examples of rising prices pour in every day and their common denominator is the imbalance between supply and demand, especially on the supply side. PPI and CPI indices have been rising in concert, although the former is outpacing the latter. The spread between PPI and CPI has not been so wide since the oil crises in the mid-1970s. Examples of skyrocketing input prices are legion: aluminium and coal prices are up 50% since their pre-Covid levels, transportation costs to move a container from Shanghai to Los Angeles have increased seven times over the same period, electricity prices by a factor of five – the list goes on.

The Goldilocks environment has probably come to an end and the planets are now out of alignment. Recent market action on and below the surface indicates that investor complacency has eased but not disappeared. The MSCI AC World index is down 2% from its 6 September peak. Although it looks like another dip in the rally, other more pro-cyclical markets such as the US Russell 2000 index of smaller companies are down twice as much, reflecting growth concerns. Volatility spiked too as the VIX index traded above 20 for the first time since mid-August. Rotation-wise, the outperformance of growth stocks against value stocks has finally stabilised. Inflation-related assets have continued to perform strongly, especially inflation breakevens and cyclical commodities. 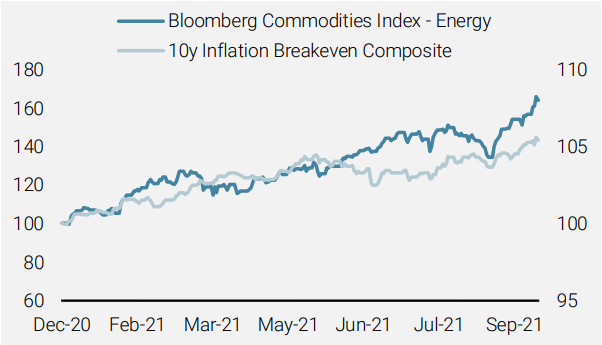 Source: Bloomberg, Unigestion, as of 14.09.2021. Inflation composite is an equal weight US, European and UK Inflation Swaps returns

We believe that current market action makes sense given the uncertainties that have emerged recently on both macro and political fronts. The momentum observed up until September had turned from what we considered “rational exuberance” into complacency, leading us to become more cautious and reduce allocation to riskier assets. Nevertheless, our assessment of the current environment remains positive, albeit with more discrimination. We expect both macro and market volatility to run at a higher pace than earlier this year, but we expect growth to stabilise around its long-term potential. Continued improvements in vaccination campaigns will keep demand afloat, and imbalances in the US jobs market should normalise sooner rather than later, now that the special Covid compensation benefits are being terminated. In the meantime growth uncertainties should relieve pressure on central bankers to taper and provide accommodation for longer, but probably at a reduced pace. We therefore continue to favour reflation assets, which play a key diversification role in the current environment. 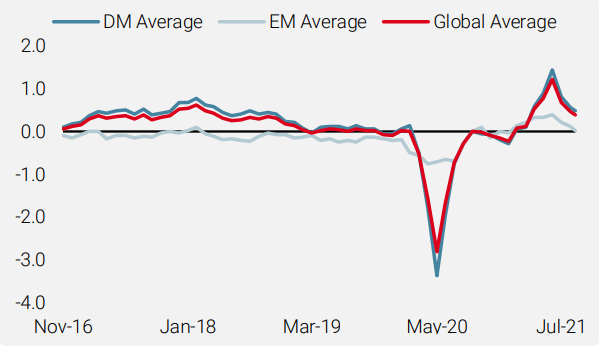 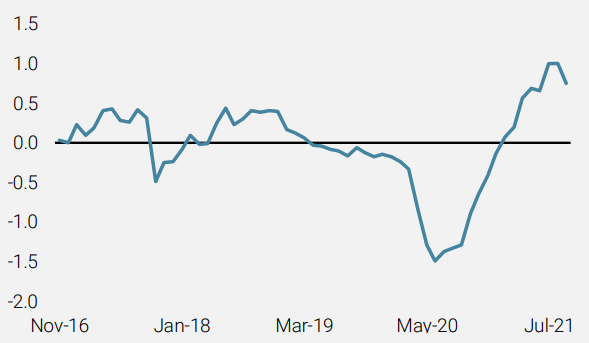 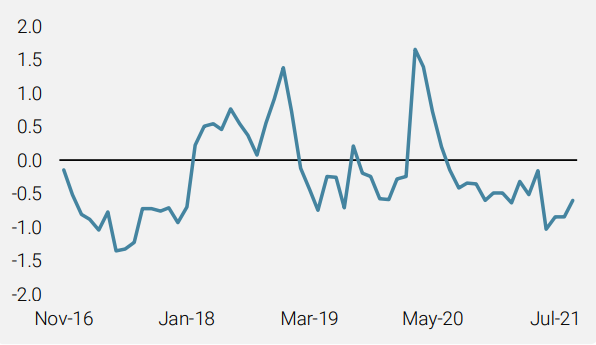