Home / Insights / Market Views / Is the Recession already Over?

Is the Recession already Over?

After five consecutive months of gains, global equities have returned to positive territory for 2020. This performance came at a time when economists’ 2020 growth expectations are very negative and most countries saw their unemployment rates rise sharply. With most growth assets rebounding significantly since March 2020, can we conclude that the global recession is already over, becoming the shortest in history thanks to the extraordinary and combined support of governments and central banks?

What is the market saying?

Since March 2020, the rebound has been significant for growth-oriented assets. The MSCI World index has rebounded by 52% and the MSCI Emerging Markets index by 49%. Credit spreads have narrowed significantly, allowing the Barclays US High Yield index to post a 26% return over the period while the Bloomberg Energy index also rebounded by 23%. Over the same period, the US 5-year inflation breakeven went from a low of 0.19% to 1.7%, i.e., an increase in the inflation premium of 150 basis points. The first conclusion that we could draw from these performances is that investors see the economic slowdown as a thing of the past, rather than a future problem. Consequently, this rebound raises two questions: Is it historically exceptional? Does it reflect a cyclical improvement or is it disconnected from the real economy and purely driven by the expansion of central bank balance sheets?

Regarding the similarities with previous crises, the current rally does not appear exceptional compared to 2008. Thus, between the March 9, 2009 low and the end of August 2009, the aforementioned assets rebounded more significantly than in 2020. As an illustration, the MSCI World posted a cumulative performance of 61%, emerging equities surged 78%, and the Barclays US High Yield index rallied 43%. However, participation in the 2009 rebound was much greater than in 2020. The MSCI World Equal Weighted index significantly outperformed the capitalisation-weighted MSCI World (78% vs. 61%). In 2020, the rally was much more concentrated, with the equal weighted index underperforming the market cap index. Two metrics illustrate how the current rally lacks homogeneity: 57% of the companies in the MSCI World are still down since the beginning of the year, while the index is up 6% in 2020. The dispersion between rising and falling stocks is also extreme as the average performance for rising stocks is 20% compared to an average performance of -23% for falling stocks.

Regarding its economic interpretation, it is difficult for us to consider this rebound as an anomaly. While the NBER determined in June 2020 that the recession in the US began in February 2020, many economic indicators have rebounded strongly since then, indicating that the slowdown due to widespread containment could end quickly. This economic normalisation is also corroborated by our Growth Nowcasters, which monitor all GDP components in real time. They have rebounded strongly between March and August, approaching levels that are neutral in terms of macroeconomic risk. Thus, the US Nowcaster “Employment”, “Housing”, “Production expectations” and “Consumption” components are all between -0.5 and 0.5 compared to between -4 and -6, the average levels for the recessions of 1990, 2001 and 2008. Only the “Financial conditions” and “Investment prospects” components remain in negative territory, but they are still above their average values observed during previous recessions.

Other indicators also highlight the cyclical rebound and the return to normal for the global economy. World trade rebounded strongly in June. Its current level is only 10% lower than its peak observed in December 2019. During the 2008 crisis, such a rebound occurred in December 2009, much later and much more gradually than in 2020. Finally, an important element shows to what extent current pricing anticipates the end of the recession: earnings expectations. The picture of the second quarter, although more positive than expected, paints a picture of a global economy heavily affected by the COVID shock. On average, profits fell by 30% for the S&P 500 index and 25% for the Stoxx Europe 600 index in Q2 2020 vs. Q2 1019. These figures are consistent with those observed during previous recessions. However, analysts’ expectations show a much rosier future with significant increases in earnings growth for 2021: 29% for the MSCI World, 27% for the S&P 500 and 39% for the Stoxx Europe 600. All of these elements point to a recession that will end very quickly.

What do we believe?

Even if this cyclical improvement has been global and synchronized, both positive elements for its sustainability, we do not believe that the horizon is risk-free. Although we continue to believe that the environment remains favourable for growth assets over the medium term, two types of risk should be taken into account in our dynamic allocation. The first is macroeconomic and pertains to credit and liquidity risk. The cyclical improvement has been achieved at the cost of unprecedented rising corporate and government debt. This has increased leverage in the economy and thus its sensitivity to duration and liquidity risk. In short, never before has the global economy been so dependent on the support of central banks and economic policies. The consequence is that the economic model is more fragile and less efficient than before the crisis: more fragile because it is subject to the risk of economic policy mistakes. What will happen if monetary and budgetary support becomes less important – or worse – comes to a halt? Less efficient because, whatever its cost, the burden of this debt will reduce the productivity and future profitability of the most indebted companies and countries, either through higher interest rates or a weaker currency, two variables that are supposed to reflect and discriminate credit and liquidity risk between countries and companies. A recent NBER study1 that analyses how US firms increased their liquidity during the COVID crisis highlights how strong the discrimination was between the best-rated firms (Investment Grade) and the worst-rated or unrated ones. The former were able to increase their liquidity significantly and permanently via the bond market, while the lower-rated firms only had access to this market after support measures were implemented by the FED in March 2020 and in a much more limited way.

This situation presents a twofold risk in the event of an insufficient economic recovery: 1) a risk of cascading bankruptcies as the volume of BBB-rated debt or lower has quadrupled since 2008, highlighting a significant increase in the number of leveraged companies in the economy; 2) a systemic risk for the banking system, which has had to increase its exposure to the most fragile companies. As their access to financial markets has been more constrained, these companies’ proportion of bank credit in their debt has risen significantly. The jump in provisions put in place by banks in Q1 and Q2, and the increase in their solvency ratios in the wake of the 2008 crisis, are mitigating factors in the face of such a risk. However, this negative scenario explains why the banking industry underperformed all other sectors in 2020 and has contributed little to the rebound since March 2020.

As a result, we believe that the current rebound should enable the global economy to emerge from recession relatively early, in late 2020 and early 2021. However, economic normalisation will not lead to an economic paradigm shift: we do not believe in a strong expansion generating inflationary pressures. Our belief is that the future will still be characterised by positive but weak growth and thus by a prolonged period of accommodative monetary policies. In our view, we expect more support in terms of the policy mix in the coming quarters rather than less.

What does this imply for our medium-term asset allocation?

In a prolonged low-growth macroeconomic environment, our dynamic allocation rests on two convictions:

1) Interest rates should remain low for longer than expected. This reflects ongoing risk aversion among households, corporates and investors, and implies that the search for “quality/defensive” assets will continue, further intensifying the dispersion between assets, sectors and countries. This translates in two ways in our portfolios: a) within growth assets, we prefer equities to high yield credit; b) within equities, our preference is for so-called “quality” securities and indices at the expense of “cyclical” or “value” securities. We therefore prefer the Nasdaq and the SMI to the Russel 2000 or the Stoxx Europe 600.

2) The combination of low growth and higher debt means heightened episodes of market stress. This implies adding both implicit and explicit hedging strategies. The first type of hedge exposes us to defensive currencies, offering a positive asymmetry in the event of an equity market decline, such as long JPY, CHF vs NOK, GBP and KRW. The second type of hedge is being long in long-term volatility (between 12 and 24 months). 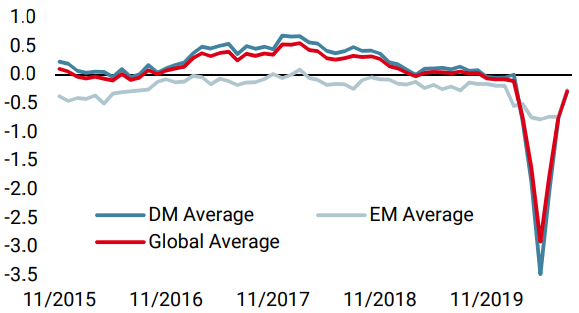 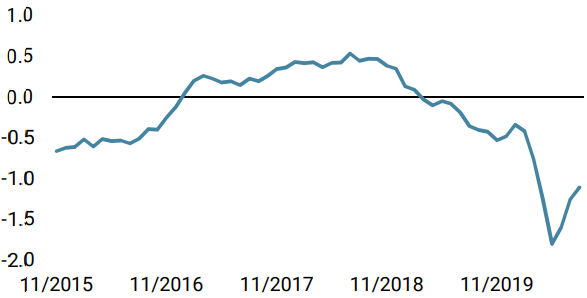 1The Risk of Being a Fallen Angel and the Corporate Dash for Cash in the Midst of Covid. NBER Working Paper No. w27601