Is Valuation the Next Big Risk?

The Vaccine Calls for a Positive View on Growth Assets

During the month of October, negative elements, notably the implementation of new lockdowns in Europe and the lack of a fiscal plan in the US, negated the positive signs coming from the earnings season. The increased uncertainty related to the health situation leads us to analyse to what extent the second wave will resemble the first one in terms of its macroeconomic and market impact. We believe that the balance of risks is tilting in favour of a significant risk reduction, while markets seem to be underestimating two negative scenarios in the short term: 1) the globalisation of a second wave of Covid-19 contagion from Europe to the US, and 2) a more uncertain outcome in the American elections than currently forecasted by the polls. In a year passed in unchartered territories, we should be prepared for all scenarios, even the worst ones, and “never say never again”.

While the percentage of companies beating estimates in terms of earnings and revenue growth was very high in both the US (84%) and Europe (66%), equity markets did not rebound in October after an already negative performance in September. Worse still, the companies with the strongest positive surprises saw their share prices relatively unchanged on the day of the announcement, while those with the strongest negative surprise were strongly penalised. This type of market reaction signals a change in sentiment and should be seen as an important “de-risking” behaviour from investors. This deterioration in sentiment was accentuated by the very geographically divergent health situation. The more the health situation was “under control”, the better the performance, and vice versa. Asia, especially China, significantly outperformed the rest of the countries benefiting from the absence of a second wave, while Europe was significantly penalised by the restrictive measures put in place to curb the spread of the virus. In this context of growing uncertainty, implied volatility returned to levels not seen since mid-June, with the VIX index around 40 and the dollar rising against most currencies except Asian ones.

Contrary to the February-March period, the decline in the stock market was more contained, without panic. Volumes were certainly significant, but without any comparison with those observed previously, interbank spreads remained tight (15bp vs. 140bp) while volatility of volatility remained well below its March highs (150 vs. 208). In our view, the current correction reflects more a repricing of a lasting and deep macroeconomic shock than a new market stress. The sharp correction in cyclical commodities is therefore the first sign of an adjustment in the growth premium. The widening of high yield (HY) credit spreads is the second. On the one hand, credit is more determined by macroeconomic factors than equities, which are more sensitive to microeconomic factors, and on the other hand, HY indices underperformed their historical equity beta in October. Finally, growth stocks underperformed defensive stocks: Energy and Technology sectors continued their September underperformance while the Financial and Utilities sectors significantly outperformed. At this stage, the repricing of a macroeconomic shock is still moderate as illustrated by the performance of our macro baskets in October: -2.1% for the Growth basket vs. -10.4% in March and +2.6% for the Market Stress basket vs. +16.5% in March. Similarly, our Nowcaster and Newscaster indicators do not point to a high risk of recession. However, these indicators reacted little in February, at the beginning of the Covid crisis. Above all, we estimate that the quality of current growth appears much weaker than in January 2020, because: 1) the level of debt is higher, and 2) the benefit of monetary support is mostly already priced in. The growth premium thus seems to us to be more at risk today than yesterday, especially if two risks materialise in the short term.

The market’s reaction to the first wave was sudden and brutal, reflecting: 1) a step into unknown territory, 2) an overexposure of investors to risky assets, and 3) significant leverage within systematic strategies. The combination of these three factors resulted in a major liquidity risk in addition to an unprecedented macroeconomic shock. The hypothesis of a second wave in the coming weeks would, in our view, have a different impact on financial assets because these three elements have disappeared or have been transformed. Governments, the medical profession and markets have all learned from the first wave and have therefore reduced the negative impact of: 1) uncertainty, and 2) the surprise effect. The result is a positive element on the horizon: the vaccine.

Concerning market sentiment and investor positioning in particular, the situation has also evolved positively. Due to increased volatility, leverage and exposure to risky assets, both have decreased. Our monitoring of positions in systematic strategies such as CTA, ARP and Risk Parity shows a much lower weighting of equities and credit, with net exposures halved on average compared to February-March. These two rather positive factors tend to anticipate a more measured impact on financial assets than at the beginning of the year. This view is also reinforced by the lack of globalisation of the second wave, as Asia seems to be less affected by the rising Covid cases observed elsewhere in the world.

However, we believe that fundamentals would be further and more durably weakened in the event of a “bis repetita” in terms of health. A close analysis of the components of our Nowcasters shows that, despite the rebound observed in Q3, and confirmed by the publication of US GDP last week, the long-term growth drivers remain weakened. The two components that follow consumption in the US show very negative levels, whereas they were positive in February. A recent study by the NY Fed confirms that fiscal support has been used to pay down debt or increase precautionary savings and not to consume. Consumption is the main engine of US growth and a source of income for services, which account for more than 70% of US GDP.

The situation seems better for China where its components are all positive and above the levels seen at the end of 2019. However, some components showed a sharp deterioration in October, notably the “external demand” component, reflecting the deteriorated situation in Europe in particular. The “Housing” component also posted a significant decline over the month and could signal an increase in risk aversion in China. These two elements are essential for long-term Chinese growth.

Finally, our Newscaster indicator, which tracks GDP trends through news and newspaper articles, shows a large decline for Europe in recent weeks. In our view, global growth, although it has rebounded, does not appear strong enough to withstand a second shock, even if it remains more limited and more local than at the beginning of the year. In addition, the impact of a new cycle of monetary and budgetary support should be significantly weaker, given that interest rates are close to 0% everywhere and that the level of indebtedness of the most fragile companies has risen significantly, as shown by recent BIS studies. As a result, the risk of a lasting adjustment to the growth premium has increased and justifies a much more cautious dynamic allocation.

Uncertainty and focus on the outcome of the US election has recently taken a back seat due to: 1) the worrisome health situation, and 2) the rising probability of a clear result in favour of the Democratic candidate. According to numerous national and local polls, Biden’s victory will be decisive with an 88% probability of victory according to the “FiveThirtyEight” model. More importantly, markets seem to be betting on a “blue wave” that would give the Democratic Party a majority in the Senate. The Russel 2000’s outperformance in US equities in October illustrates the sector rotation bet that a “blue wave” would imply and the large stimulus expected by market participants. Moreover, the rise of US long-term rates over the month while equities were down highlights the high level of pricing towards the “blue wave” scenario. However, contrary to market expectations, we believe that the most likely scenario (45% vs. 30% for “blue wave”) remains a “mixed government” involving a Senate that is still Republican but with a Democratic president. Such a political situation would, in the short term, have a negative impact on growth assets given current expectations for a substantial new stimulus for the US economy, and could lead President Trump to contest the election result, thus increasing uncertainty. This scenario seems underpriced by markets at this stage.

Over the last few weeks, the aggregation of these signals and the analysis of pricing has led us to move from an overweight to an underweight on growth assets such as developed equities and high yield credit spreads. Only two elements could lead us, in the short term, to modify this cautious dynamic position: the arrival of a vaccine and/or the implementation of a globally coordinated stimulus in the order of 10% of GDP, supported by the growth of central bank balance sheets to avoid an increase in credit risk in the most fragile sovereign states. 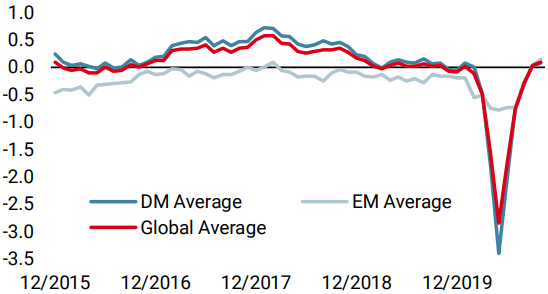 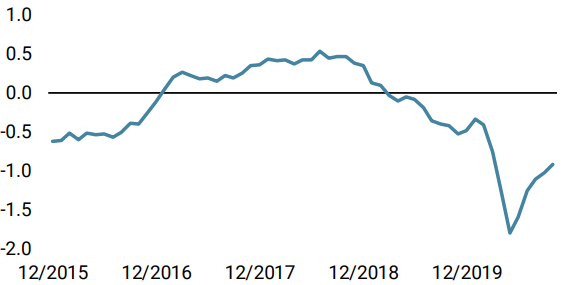 Is Valuation the Next Big Risk?

The Vaccine Calls for a Positive View on Growth Assets