After a strong global economic recovery in the first half of the year, the events of Q3 – weakening growth and continuing inflation – have become concerning and raise the potential risk of stagflation. Stagflation is rare and the opposite of the macroeconomic environment we have experienced over the last decade. While it would be a nightmare outcome for the economy, for monetary policy and for investors, it is not our core scenario over the coming months. For this, we would need to see a more intense continuation of the current dynamic and a significant stalling in the reopening of economies.

Breaking Up Is Hard to Do

The rising spectre of stagflation

The reopening/reflation theme that characterised the start of the year has stalled over the last few months with the spread of the Delta variant and a fading fiscal impulse. As we have communicated, our systematic growth indicators – both Nowcasters and Newscasters – have been heading south from elevated to more neutral levels. At the same time, our Inflation Nowcaster has remained elevated, supported by multiple factors including Input Prices, Wage Inflation, and, importantly, Expected Inflation. It is through these channels – pockets of price increases leading to an inflationary mindset that sees a broader rise in prices from firms as well as employees asking for higher wages – that a transitory supply shock transforms into a genuine inflationary scenario. With the backdrop of lower – but still decent – economic growth, the potential risk of stagflation is moving up in investors’ minds.

A framework for the drivers of stagflation

Stagflation is, in many ways, a nightmare scenario for the economy, monetary policy, and investors: real economic growth is low or even negative at the same time that prices move ever higher, leading to lower standards of living and high unemployment. Bruno and Sachs1 presented a framework for stagflation that rests on two key conditions: (1) a large and unexpected increase in prices for inputs produced externally requiring a reduction in the standard of living for importing countries, and (2) wage inflexibility that reduces demand for labour and thereby increases unemployment. They argue that these elements are critical to understanding the rare cases of stagflation in the recent past: OECD countries in the 1970s, when the oil embargo of 1973 hit prices and reverberated throughout the decade. Figure 1 charts growth and inflation for the US and UK during the period, highlighting a similar pattern seen with many other OECD countries at the time: a cyclical recovery in the early 1970s derailed by the oil crisis (grey vertical line), after which growth and inflation decoupled and stagflation became the emergent regime. 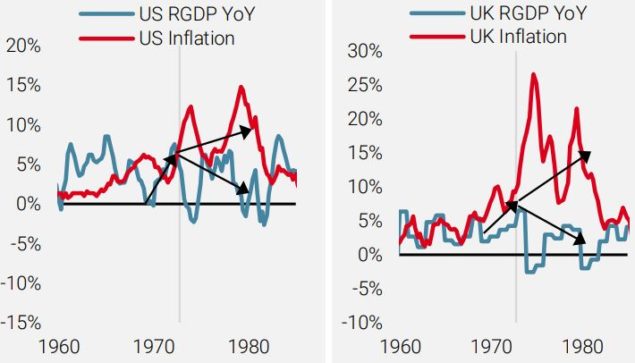 As Bruno and Sachs discuss, the downward inflexibility of wages feeds into the price/wage spiral and can shift an economy from an inflationary expansion to stagflation. Figure 2 shows how US nominal wages during the 1970s continued to grow steadily, as employees demanded higher wages in the face of higher consumption prices. However, this nominal wage growth was out of line with deteriorating economic conditions and lower productivity, leading to layoffs and higher unemployment. Importantly, real wage growth collapsed as nominal wages could not keep up with goods inflation, leading to lower real incomes and standards of living.

Figure 2: US Wages vs Productivity 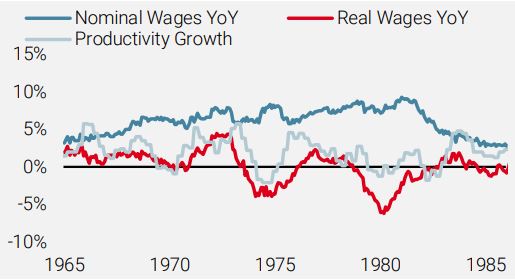 Reading note: Productivity Growth is the year-over-year change in the output per hour of labour in the non-farm business sector.
Source: Bloomberg, Federal Reserve Bank of St. Louis, Unigestion, as of 30.09.2021.

Where are we today?

Let us be clear: stagflation is not our near-term core scenario but rather a growing tail risk. We would need to see a continuation of the current dynamic, in particular economies stalling in their reopening, to change our view. It is also important to point out that the example of the 1970s is not a perfect analogy for today. The global economy is coming out of an historic period of lockdowns, the price of oil has less of an impact on individuals as the source of today’s supply shock is more varied, and monetary policymakers have gained the experience of the last period of stagflation. However, given the dramatic impact of stagflation on markets, we continue to assess the situation closely.

As we have communicated previously, producer prices have risen significantly faster than consumption prices, providing further upward pressure on inflation if firms pass on these additional higher costs to consumers. At the same time, nominal wage growth has remained relatively constant despite unemployment figures receding. Figure 3 compares the growth in hourly wages in the US against the unemployment rate, placing the current situation (red) into the context of the 1970s (dark blue) as well as the last couple of decades (light blue). While the number of data points remains low, thus far wages have not exhibited the inverse relationship typically expected over the short run. 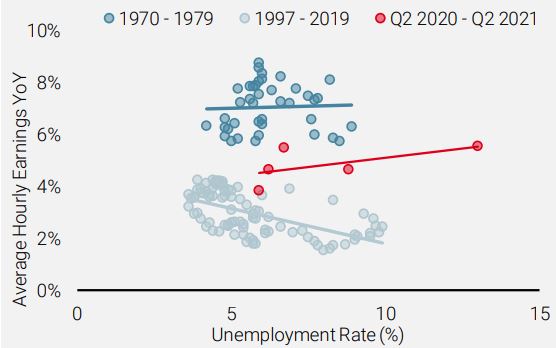 Few shelters in the stagflation storm

Stagflation is, by and large, the opposite of the macroeconomic environment we have had for most of the last decade: decent growth and muted inflation pressures. Thus, investors have moved into positions that benefited the most over the last decade: nominal bonds (where yields continued to grind lower and have offered diversification) and equities (especially those with long-term growth prospects that have benefited from falling discount rates). However, the reversal of the macro environment to a period of stagflation would lead to a significant reversal in these markets. Figure 4 shows the average monthly performance of growth (credit spreads and equities), defensive (government bonds), and real assets (inflation breakeven and commodities) since 1999 and compares that to their performance in “Goldilocks” and “Stagflation” months. As the chart demonstrates, the dispersion between these two regimes is significant, making the transition from a Goldilocks scenario (as arguably we had at the beginning of this year) to an inflation shock with depressed growth a challenging one for investors. 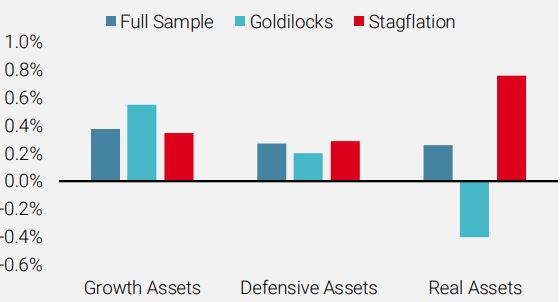 Reading Note: “Goldilocks” months are defined as those where our Global Growth and Inflation Nowcasters signalled low to very low risk of recession or an inflation shock. “Stagflation” months are defined as those where our Inflation Nowcater signalled high to very high risk of an inflation shock but our Growth Nowcaster signalled the economy was not in a strong expansion (low to very high recession risk).
Source: Bloomberg, Unigestion, data from 31.12.1998 to 30.06.2019.

Before the 1970s, the concept of stagflation was thought to be impossible. Indeed, the combination of circumstances that give rise to stagflation are quite rare, and so many investors have not had the experience of managing portfolios during such tumultuous times. In our view, it remains too early to sound the alarm on stagflation and our near-term macro scenario remains positive: a subsiding of coronavirus fears and continued economic reopening. Thus, our dynamic portfolio exposures are tilted towards both growth-oriented assets, such as equities and credit, and real assets, in particular inflation breakevens and cyclical commodities. We expect the real asset exposure will be with us for some time, but if the risk of stagflation rises, we will progressively reduce our growth exposure to ride out the difficult storm. 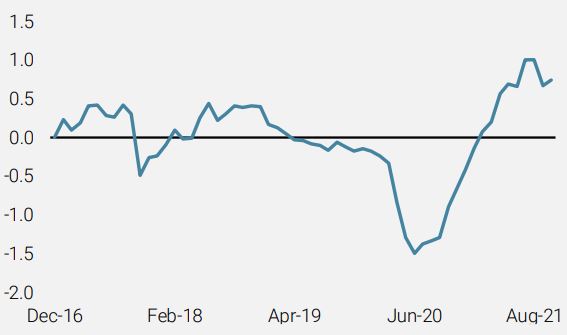 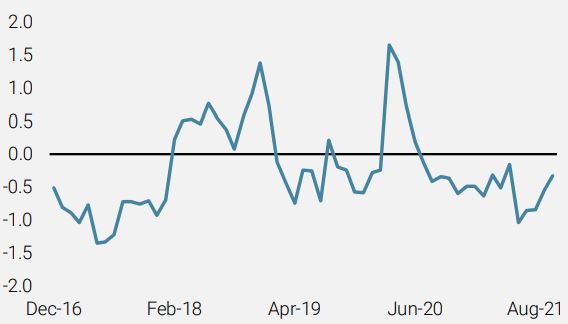