The Recession Is Ending

While our scenario for the global economy remains intact – a strong recovery buoyed by fiscal and monetary support and no major inflation pressures – we are focusing on nascent risks to this core scenario. In addition to our concerns on high yield credit that we communicated recently, politics and geopolitical tensions are potential spoilers to our positive view on growth-oriented assets. A premature pull-back on fiscal stimulus, specifically in the US, is most worrisome, but the other risks are worth monitoring closely. However, at present, they remain no more than risk scenarios and we maintain our positive outlook on risky markets.

I Feel It Coming

We continue to believe in a V-shaped economic recovery, supported by our systematic indicators. Our growth Nowcaster presently points to the end of the recession in a handful of key economies, including the US, China, Brazil and Taiwan. Laggards include the Eurozone, Japan, and Mexico but all are improving. Of course, the pace of the expansion – i.e., the second derivative – is important and some investors have grown concerned about the slowing down of the macro improvement. Indeed, the diffusion index of our growth Nowcaster, which measures the proportion of improving underlying data, has receded from its peak of 77% at the end of July to 61% presently. However, it is important to put these numbers in context, as economies cannot sustain such a strong pace. For example, during previous expansions in the US (1991 and 2009), the economy rebounded strongly from its nadir (the US diffusion index hitting 75% and 80%, respectively, in the first month of recovery following the 1990 and 2008 recessions). The economy then continued to expand at a more modest pace (the diffusion index averaged 53% and 63% over the following twelve months, respectively), as the economy shifted to more steady and sustainable growth levels. Thus, while we acknowledge that the recovery has slowed, we do not yet think it is at risk of derailing.

One of the key supports for the recovery has been unprecedented monetary policy. There has been growing concern recently that an inflation overshoot is brewing that will weigh on all assets valued in nominal terms through the discount rate channel, as well as lead monetary policy to tighten. This is readily apparent in breakeven inflation rates: for example, the 2-year US breakeven inflation rate is up over 210bps since its lows in March (from -93bps to 119bps). As we will explore in more detail in an upcoming publication, we wholly expect an inflation normalisation (or “reflation”) but an inflationary shock seems unlikely in the short to medium term.

Risks on the horizon

Nevertheless, there are clouds gathering that could undermine the current positive macro context. Primary among these is the end of the massive fiscal stimulus that has offset the massive loss in incomes for households and businesses. The US is particularly at risk as unemployment benefits expired at the end of July and have only continued (in smaller amounts) thanks to a presidential executive order. The order sanctioned payments from the Federal Emergency Management Agency (FEMA) disaster relief fund (up to USD 44bn), which is now also being drawn down due to the extensive wildfires in California. Last Thursday, FEMA confirmed that their unemployment payments will be ending soon (the programme was expected to last for about six weeks). With unemployment at 8.4%, Congress deadlocked on further stimulus, and few legislative sessions before the election, the prospects for fiscal stimulus in the US are dim for the near-term, making the world’s largest economy acutely susceptible to another downturn.

Another risk emanating from the US is the upcoming election. While Biden maintains a healthy lead in the presidential polls, the more important races for the market are in the Senate, where it remains unclear which party will command a majority. An extreme, yet growing, tail risk is that President Trump loses but refuses to accept the results (claiming voter fraud, declaring himself the winner before all mail-in ballots are counted, etc.), leading to litigation in many states. In this case, we would likely see a replay of the 2000 Florida recount and a Supreme Court decision, possibly involving multiple states and a high degree of uncertainty weighing on markets. However, investors seem to have already significantly hedged this risk, with the November VIX contract at 30.4 (the highest ever for a November contract during a presidential election) and the December contract at 28.9.

Finally, tensions between the US and China seem likely to flare up again: both Trump and Biden have and will continue to position China as a threat to the US, the pro-democracy movement in Hong Kong remains a controversial topic for both countries, and Chinese technology firms (Huawei, TikTok, etc.) continue to be the focus of US scrutiny. China is also far behind on its commitments to purchase US goods as part of the phase 1 trade deal. According to the non-partisan Peterson Institute for International Economics, China has imported USD 48.5bn of US goods as of July 2020, less than half of the prorated target of USD 100.7 bn. Whether due to willingness or ability, this provides the US with an opening to exert further pressure on the Chinese and threaten, if not re-impose, tariffs that had been reduced or suspended as part of the trade deal.

Managing the risks but sticking with our core convictions

It is important to reiterate that we remain positive on growth-oriented assets, especially equities, as our investment horizon and indicators point toward a favourable environment. However, we have decided to balance this positive outlook with a bearish view on high yield credit, which we believe will be more susceptible to a macro-driven shock if a failure of fiscal stimulus leads to a second leg down in the economy. We also believe the path ahead for assets will be much more volatile than what we experienced over the summer given the risks that are gathering. 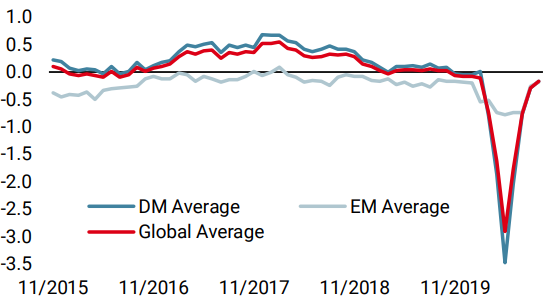 The Recession Is Ending