Home / Insights / Market Views / What Path Will the US Dollar Follow from Here?

What Path Will the US Dollar Follow from Here?

Mi Insights: The Path of the US Dollar

Slowing Growth is a Global Phenomenon

For multi asset strategies like ours, foreign exchange (FX) is an excellent way to diversify as well as to arbitrage potential opportunities. As we have been reminded many times during periods of stress, such as last year’s Covid-19 crisis, the USD is the ultimate safe haven. We examine the textbook drivers of the dollar and where it stands today in order to determine the likely path the USD might follow from here.

What are the textbook drivers of the US dollar?

Textbook drivers typically include interest rate differential, macroeconomic momentum, current account balance, political risk and sentiment. Unlike other asset classes, currency trading requires taking a view on two markets as each currency will be a relative value trade versus the other. ‘The dollar’ is therefore a very broad topic and, just like most asset classes, it calls for selectivity as there will continue to be winners and losers within the spectrum of FX markets. The US Dollar Index (DXY), often referred to as a benchmark for the currency, has more than half of its weight against the EUR and only includes six of the G10 currencies. The Federal Reserve (Fed) has also developed its own trade-weighted USD index which follows a similar pattern to the DXY although it includes many more currencies (26 in total). The currency weights are based on international trade and will therefore change over time. Both indices show a similar picture: the USD has outperformed so far this year. What have been the drivers?

Political risk: Many studies have been carried out over the years on how the USD reacts under different political administrations. Some argue that the USD tends to perform better during Republican administrations than Democrat ones as the latter tend to engage in less hawkish policies, although the economy tends to perform better. If we look at the performance of the Fed US trade-weighted dollar index since the early 1970s, we can see that the performance of the index is very mixed and inconclusive overall. More importantly, political risk tends to be more of a headwind for countries dependent on external funding and flows, which is usually the case for emerging markets. This year has been a good illustration of this: in Latin America, political risk has weighed heavily on the currencies of Peru, Colombia and Chile, either due to upcoming elections or market-unfriendly reforms.

Figure 1: FED Dollar Index Performance under Different Political Regimes in the US 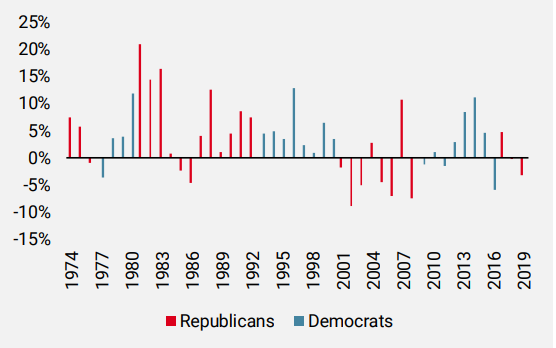 Carry: The interest rate differential between two countries and the expected monetary policy path (tightening or easing) will typically be reflected in FX forward points, which will result in either a cost or a credit of holding a long or short currency pair. All else being equal, this will also give a quantifiable measure of hedging costs. The positive carry induced from holding long USD positions against a majority of G10 currencies starting in 2018 was an important supporting force driving the USD higher. As we can see today, the average relative dollar carry across G10 FX is now close to zero from peaks previously reached in 2019. With many emerging market central banks having started their hiking cycle this year to fight rising inflation, the cost of holding USD longs compared to the beginning of the year is even more striking. The carry element has therefore not been a positive driver for the USD this year and will have acted more as a headwind. 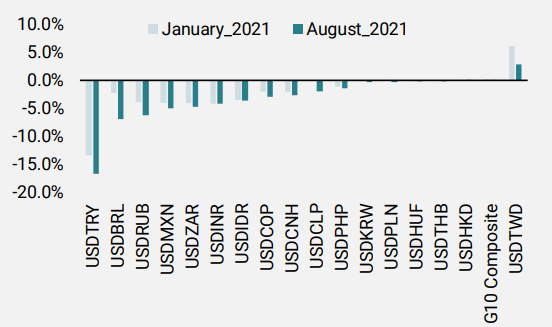 Macro Momentum: Macroeconomic momentum is a strong and clear driver for FX markets as divergence between countries will naturally make winners more attractive given the stronger fundamental base. Strong macro momentum will also naturally feed into hawkish monetary policy expectations and thus help the currency further. US growth momentum since late 2017 and into last year’s Covid crisis has outpaced that of both the Eurozone and China, which is one factor that explains the strong USD rally witnessed during that period up until the pandemic. So far this year, the US recovery has outpaced that of China and emerging markets more broadly as many emerging countries were left having to deal with second and third waves of Covid while the US was quick to roll out vaccinations and reopen its economy. On the other hand, we have recently witnessed a slowdown in US macro momentum while the Eurozone has held up strongly, although this has left the USD unfazed for now, particularly against G10 currencies. It is therefore interesting to note that the recent leg of the USD rally has not been driven by an outperformance of US macro momentum.

Monetary Policy: Historically this has been one of the most important drivers for FX markets. Hawkish central banks will typically make a currency more appealing as it will also increase the positive carry of holding that currency. Divergence between monetary policy and central bank mandates have been large this year and clear dispersion is observable between countries with a tightening bias versus those with a dovish bias. Within the G10, Canada, Norway, the UK and New Zealand stand out and the relative performance of their currencies is also reflective of this. The direction of the Fed has even bigger repercussions and plays a large role in the direction of the USD. Following the recent Jackson Hole meeting, markets have started to price a more gradual approach to tightening from the Fed given that the future path of monetary policy will put more emphasis on the Covid Delta variant and job growth. The USD has since taken a step back and depreciated strongly from its recent highs. This likely means that, going forward, the direction of the USD will become even more sensitive to US macro data and macro data momentum, particularly employment data.

Hedging properties of the dollar?

Outside of traditional beta hedges such as equity downside or long volatility trades, the USD also offers great diversification properties in a portfolio. High beta emerging market currencies and commodity currencies tend to depreciate more extensively against the USD during episodes of stress. During last year’s pandemic as a recent example, the USD appreciated sharply. During the month of March 2020 alone, the USD index (DXY) rallied over 8%. We believe that holding a long USD bias to hedge equity beta is both attractive and diversifying and can at times be cheaper than paying expensive option premia / skew and time decay. 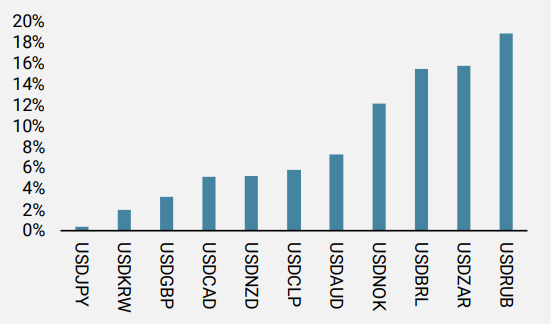 Our conclusion and positioning on USD?

It is interesting to note that there is usually no single dominating factor driving currencies as they are impacted differently by one or more factors. Some of these forces will be at play over the long term while others are much more short-term in their effect. However, what is striking this year is that the typical textbook drivers to FX have taken more of a backseat role. The USD seems to have been driven primarily by the race to roll out vaccinations, an extension to US fiscal and monetary stimulus, and the resulting flows, which have driven US equity markets to record highs. The resulting divergences have been particularly large against emerging market currencies and this largely explains why the USD has outperformed significantly so far this year despite an overall higher negative cost of carry and the growing US deficit.

Another important driver so far this year has been positioning. Many market participants and CTAs started the year positioned with a short USD bias but a large part of these trades have now been cut and the market is much more neutral towards the USD. We continue to believe that a long USD position to hedge equity beta is warranted and acts as an attractive diversifier to traditional hedges. We are overweight the USD at the fund level but continue to play long and short biases against individual crosses where we see opportunities. We particularly like the long Indian rupee against the Taiwan dollar, which has been boosted by strong foreign direct investment flows and improving vaccination rollouts following the second wave that hit India particularly strongly. In addition, the carry that the cross offers remains particularly attractive in the ‘Goldilocks’ environment we are currently in. In the short term, the likely path of the USD will be determined by US macro data, virus developments and the extent of Fed tapering to come. 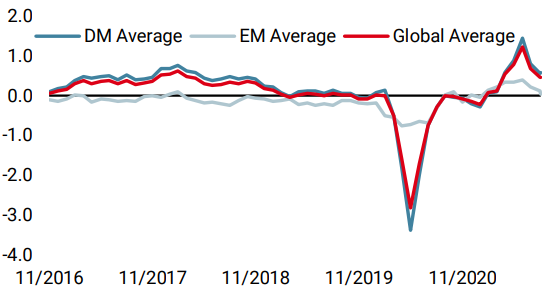 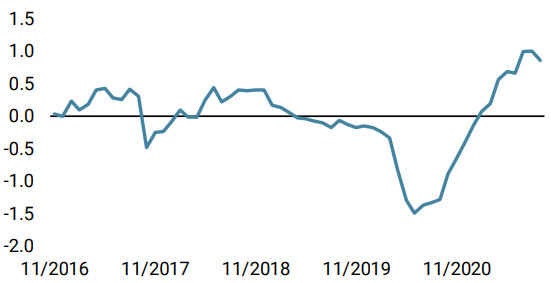 Mi Insights: The Path of the US Dollar

Slowing Growth is a Global Phenomenon