Emerging Market Foreign Exchange (EMFX) markets can provide attractive opportunities but also higher risk. Indeed, investors often face heightened political risk, higher volatility and lower liquidity than traditional developed world FX markets. Like other asset classes, dispersions have been particularly large this year, as countries were unevenly affected by last year’s Covid 19 crisis and policymakers dealt with the aftermath in different ways. In addition, emerging markets took longer to access vaccines while many also experienced political risk, which turned out to be a dominant force. This uneven distribution called for selectivity and we believe this will likely continue. In this week’s publication, we will share our views on the EMFX markets and their likely drivers going forward.

EMFX year-to-date performances have been uneven, with clear winners and losers. Interestingly, there were contrasting drivers, as fundamentals often mattered less than political risk and policy responses had a larger impact on EM currency returns. Given the different dynamics at play, EMFX has been particularly hard to navigate this year. Only a few EMFX crosses have outperformed the US Dollar so far, as most opportunities came from relative value plays, where selectivity and discrimination were essential to deliver returns. We believe this will likely continue going forward.

The pandemic: Last year’s pandemic resulted in large disparities, as some countries and regions were more affected than others were, and at different times. A majority of EM countries with poor medical infrastructure, healthcare and social services suffered greatly during the pandemic. The vaccination rollout was very slow for some, with India making headlines during the second wave last May, following the rapid collapse of its healthcare system. The Rupee, however, did not weaken materially as the continued equity inflows buttressed the currency. The Reserve Bank of India (RBI) was also in a much stronger position, having accumulated significant FX reserves over the last few years. Other nations such as Thailand tightened its borders to contain the spread of the virus. Being heavily reliant on tourism, the country suffered badly, with its historically strong positive current account balance falling. The Thai Baht (THB) plunged by over 10% year-to-date and continues to underperform its regional peers.

The post pandemic response  highlighted large disparities, with some EM nations engaging in much heavier stimulus such as Brazil and the Philippines, while others such as Mexico, South Korea and Taiwan were a lot less proactive in that regard.

Political risk: Outside of the pandemic, political risk was the single biggest driver for several EMFX crosses this year, especially in the LATAM region. Despite copper (Chile’s largest export) hitting record highs in May, the Chilean Peso (CLP) is down by -15% so far this year ahead of this month’s upcoming election, whose outcome between two political parties at opposite ends is highly uncertain. The current energy crisis and oil prices at multi-year highs should have greatly benefitted the Colombian peso (COP), given its high positive beta to oil, yet it weakened around -9%, due to political uncertainty ahead of next year’s election, where leftist and ex-guerrilla member Gustavo Petro is expected to win. A series of unfriendly market reforms in Brazil have also battered the Brazilian Real (BRL) on numerous occasions this year.

Another more recent driver is the ongoing Chinese regulatory crackdown, which has rattled local markets. Multiple defaults by property developers in China have also dampened EM sentiment. Despite the risk being relatively contained within China so far, with little spill over effects to global markets, currencies such as the South African Rand (ZAR) and the Brazilian Real (BRL) tend to react negatively to such events, as China remains a larger buyer of the natural resources these nations produce and export.

Volatility: Since last year, the drivers above led to higher volatility, decreasing the risk / reward of being long EMFX. 3-month implied EMFX volatility has  only recently returned to its average of the last four years but remains far from the lows observed pre-pandemic in early 2020. 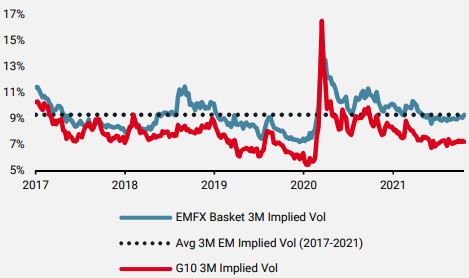 Inflation: The huge fiscal and monetary stimulus in response to last year’s Covid-19 crisis, combined with the subsequent growth momentum, resulted in strong inflationary pressures. Both our Inflation Nowcasters and Newscasters signalled a high inflation surprise risk at the end of last year and remain elevated today. We have been arguing for some time that inflationary pressures were unlikely to be transient, given the large supply side disruptions that cannot be solved quickly. Emerging markets bore the brunt as inflation stung, forcing many EM central banks to tighten, in some cases aggressively. The Brazilian Central Bank (COPOM) hiked its Selic rate by 575 bps so far this year and said that more hikes were coming, making it the most hawkish central bank in the world today. A majority of EM central banks have started to tighten and we expect this to continue as these countries typically have less room to accommodate for overshooting inflation than developed nations. We can therefore expect further policy divergence between emerging markets and the developed world.

Carry: The interest rate differential between two countries and their expected monetary policy path (tightening or easing) are typically reflected in foreign exchange forward points, resulting in either a cost or a credit when holding a currency pair. With many EM central banks having started their rate hike cycle, the carry element is now becoming an important driver for EMFX. Some currency pairs, initially used as funding currencies or beta / geopolitical hedges, have seen that cost increase significantly, making them expensive shorts to hold. For some, the carry element is now a positive factor increasing the risk / reward of being long EMFX, giving investors an extra cushion. 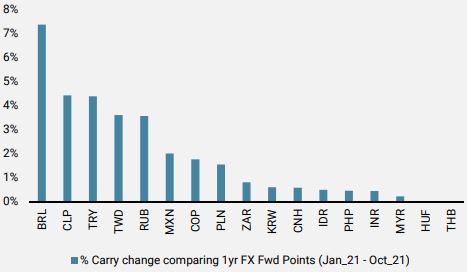 One lesson we can learn from the developed world is that the key to fighting the pandemic is the vaccination rollout. It is now clear that those with a slow vaccination rollout are likely to be the hardest hit in terms of growth. As for sentiment, it also means that the risk of further lockdowns is higher. This dispersion is likely to continue and will have an important impact on the direction of EMFX going forward. It is therefore too early to say that the pandemic risk for EM is something of the past.

While many EM central banks are well ahead of the developed world in terms of monetary tightening, the crucial one to watch will be the US Federal Reserve (FED). With many EM countries relying on external funding and with a high foreign currency debt (a large proportion of which is in USD), an aggressive FED tightening would make them very vulnerable. We think that the Fed has learned its lesson though (recall 2013’s taper tantrum), and that monetary policy changes will be telegraphed sufficiently in advance to avoid surprising financial markets. In that respect, the pricing of future US rate hikes has already moved significantly and seems at a fair level now.

Following last year’s pandemic, dispersion has been manifestly large, and we believe this will continue, as each country has been impacted differently, in terms of both timing and magnitude. The post pandemic policy responses have further widened that gap. These uneven dynamics are unlikely to bring back the extremely low volatility regime we had pre-pandemic, as uncertainty will continue to dominate. As such, we need to be a lot more selective in our investment approach, as one can no longer view EMFX as a whole. We will therefore remain selective / opportunistic and focus on relative value trades where we believe that risk / reward is attractive. In this regard, we continue to be long the Indian Rupee (INR) vs. the Taiwanese Dollar (TWD). Political risk will remain a dominating factor in many countries, which we will monitor closely, as these may open tactical trading opportunities.

We have recently witnessed a slowdown in macro momentum while inflation pressures continue to persist. We maintain our positive view on real assets, expressed via inflation breakevens and cyclical commodities. The strong momentum in commodity markets will also be an important driving force for some EMFX crosses, benefitting exporters at the expense of importers. For example, the Russian Rouble (RUB) is the best performing EMFX currency so far this year thanks to the strong rally in oil and a currently stable political landscape. 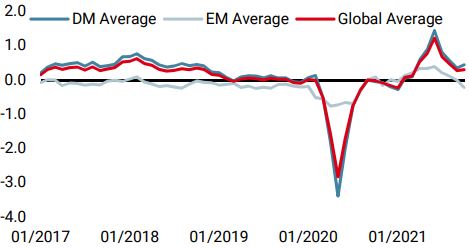 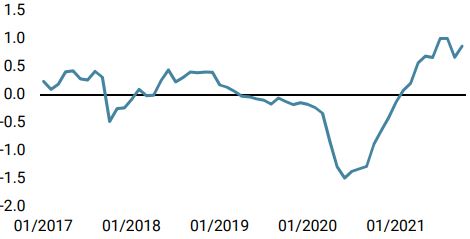 Sources: Unigestion, Bloomberg, as of 1 November 2021.