Staying Positive in a Volatile Environment

Over the past few weeks, investor sentiment has shown signs of improvement on previous months, with the narrow rally spreading to a broader risk-on environment. However, the dour tone of Chairman Powell during last week’s FOMC press conference and an uptick in new coronavirus cases have been sobering and validated some investors’ concerns around a second wave of the virus, a resumption of lockdowns, and a drawn-out or even W-shaped economic recovery. While experience has demonstrated the virus’s volatile and pernicious impact on the global economy, we believe these fears remain overstated. Policy supports remains strong, economic data is showing clear signs of improvement, and the increase in new cases is not yet sufficient to trigger a return to the lockdowns we saw in March and April. We therefore remain positive on risky assets but continue to maintain hedges, primarily via optional structures.

Markets hit pause after the FOMC

After nearly three months of solid performance that brought markets almost back to (or above, as in the case of the Nasdaq 100) their pre-crisis peaks, last week saw a significant correction. The MSCI All Country World index ended the week down 4.1%, the S&P 500 down 4.7%, the Euro Stoxx 50 down 6.8%, and the MSCI Emerging Markets index down 1.5%. The VIX index ended the week at 36, up from 25 the previous week, spreads on high yield corporate debt in North America widened by nearly 75bps, while the Bloomberg Energy Subindex was down 6%. Bonds provided some help and ended the week slightly up, with the Barclays Global Aggregate index up 70bps. Gold provided more protection, up over 3% against the US dollar, while the Swiss franc rose 1.7% against the euro.

The market moves look to have been fundamentally driven, first by the FOMC meeting and press conference, and then by the latest data on coronavirus cases. Indeed, on the release of the Fed statement on Wednesday, the S&P 500 jumped 1%, as investors welcomed the continuation of their accommodative stance and the central bank’s plan to maintain asset purchases at least at the current pace over coming months. However, during his press conference, Chairman Powell stressed the challenges ahead, noting that while the May employment report was a “welcome surprise,” the recovery will take time to remedy the displacement of more than 20 million people. It is of little surprise that the S&P 500 gave up all of its initial gains over the course of the press conference.

Whispers of a second wave

Last week also saw reports of a pickup in the growth of new coronavirus cases, particularly in those countries that are exiting lockdowns. Much of the attention focused on the US, where the total number of confirmed cases have now surpassed 2 million and expectations have grown of an oncoming second wave of cases. States that have seen relatively low numbers of cases, for example Arizona and Texas, are showing signs of an accelerating contagion. Putting these numbers in context is useful:

Not all news is bad news

Despite Powell’s downbeat note, he also made it clear that the Fed is ready to continue supporting the economy using all the tools available to it, as well as exploring potential new ones. The ECB also confirmed their accommodative stance the previous week, ensuring that credit continues to flow in two of the world’s largest economies. In the meantime, macroeconomic data has continued to improve: our Global Growth Nowcaster, while still depressed, has moved up and its associated diffusion index is now showing the majority of data is improving. The US jobs report from last week showed fewer initial and continuing claims than the week prior, suggesting that the US labour market is starting to heal. On Friday, the University of Michigan Consumer Sentiment survey also ticked up to 78.9 from 72.3 last month (and above consensus estimates of 75). Importantly, both the current conditions and expectations surveys improved over the month and beat consensus.

Staying positive but acknowledging the risks

We remain constructive on growth assets for the reasons we have recently communicated: we see the early stages of an improvement in the macroeconomy, supported by central banks ready to do “whatever it takes” and an epidemic that looks to have done its worst to the world’s major economies. Bearish investor sentiment suggests room for additional upside, while valuations do not look so rich in the context of a swift recovery, akin to a natural disaster, or compared to bond yields. This constructive view on the recovery calls for a tilt toward growth-related assets, reduced short exposures to real assets and a reduction in defensive plays such as governments bonds.

This positive view would be challenged by a genuine, sustained second wave of virus infections, especially if they strained hospital capacities to the point that lockdowns are triggered anew. Even without this, business or household reluctance to spend could still hamper the economy. In such a scenario, the recovery would be much more gradual and, in turn, call equity valuations into question as sales and profits would take a few years to recover to peak versus the swifter recovery currently expected (though low yields would likely persist in this case, potentially helping to support valuations if earnings are challenged).

It is also important to keep in mind the falling approval numbers for US President Trump, as protests following the killing of George Floyd continue across the country with the support of nearly 75% of Americans, according a recent poll by the Washington Post. Trump’s response has also not been well received, with just 37% of Americans saying he has delivered the right message in response to the protests according to a recent poll from the Pew Research Center. Online betting market PredictIt now sees the Democrats controlling the presidency, Senate, and House of Representatives after the November election. In such a scenario, a repeal of the corporate tax cut would be likely, posing a direct challenge to US equity prices. While we do not expect this risk to materialise in the near term, we are monitoring it closely as it would have a direct impact on corporate earnings growth.

For these reasons, we complement our positive view on growth-related assets with hedges, primarily via options that aim to provide downside protection and add convexity to our return profile. 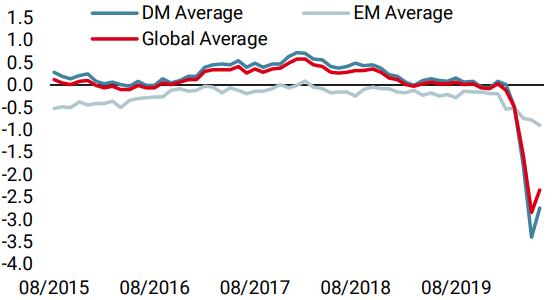 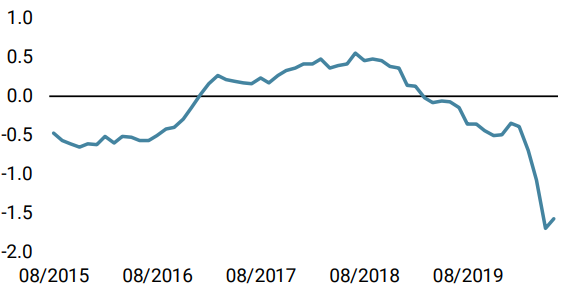 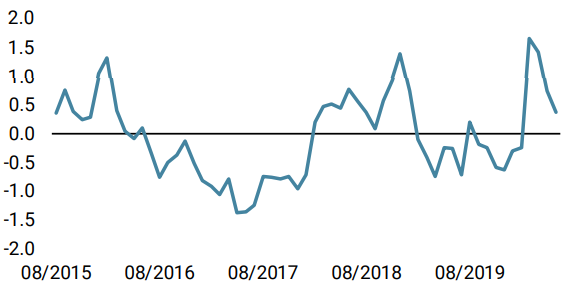