The COVID-19 recession seems to be just a technical one, raising questions about the deflation phase that usually follows a recession. In our view, the V-shaped recovery that we expect on the growth front, the steady wage growth throughout the crisis and the still-decent core inflation growth rate point to higher – but moderate – inflation in the near future. At this stage, we have eliminated most of our underweight to inflation-hedging (‘real’) assets to adapt our portfolios to this evolving dimension, but our residual underweight reflects their expensiveness. For us, this is another step towards investing in a broader market recovery.

In a normal recession, two deflationary forces typically start acting on the economy: one directly through commodities that weigh on headline inflation figures, and one indirectly as slowed activity increases production slack and lowers wage growth, inducing pervasive deflationary pressures. Is this time different?

First, the direct commodity impact: the rapid collapse in commodity demand – from the industry side first and then reflecting final demand – has led to a rapid decline in commodity prices. WTI prices lost 52% while industrial metals broadly dropped by 24%. These numbers are significant but not as impressive as those during the GFC. In 2008, the peak-to-bottom drop in oil prices was about 70%, and 64% for industrial metals. 2020’s decline sits in between those of 2008 and 2001: it has been intense but shorter than the GFC’s extended demand contraction. In the near term, this should impact headline inflation indices first.

A second impact could follow, given the historical 18-month feedback mechanism from commodity prices to core inflation. A large decline in commodity prices can therefore have a longer lasting impact on core inflation itself. However, due to the temporary nature of the current contraction, this effect should not be as strong as usual; in fact, one might even expect it to be marginal. Oil prices have already recovered partially: in the coming months, they should contribute positively again. It is the same story in industrial metal markets: the lower inflation headline figures we are currently seeing (+0.1% year-on-year US inflation) are probably not here to stay.

The second consequence is that, with a contraction in global demand, production capacity has declined materially. In the US, the economy’s capacity utilisation rate fell to 64% in April with a timid uptick to 64.8% in May. The same figure in the Eurozone reached 69.7%, but with some disparity: this rate ranges from 56.7% for Ireland to 77% for Finland. This considerable economic slack is usually a tell for declining inflation ahead: over the longer run, the strength of the underlying economy, particularly the growth rate of wages, is closely linked to the growth rate of prices, according to economic theory. The overall cautiousness of companies, the large temporary lay-off programmes and the uncertainty stemming from the uniqueness of the current situation makes the macro side of inflation uncertain.

Reflation seems to be on its way

These two effects would apply in the case of a “normal” recession, i.e., a recession that comes from the economy itself, not from the fact that somebody simply hit the “stop” bottom in March. As the world economy’s engine reignites, we think it is essential to pay attention to the dynamic of inflation. Here, we see two dynamic evolutions and a missing piece in this deflation puzzle.

First, the missing piece: to be able to call clear-cut deflation, one would need wage growth to stumble. In the US for example, the Atlanta Fed wage growth indicator – one of the most reliable wage growth trackers in the US – has remained around 3.5% for workers who have remained in employment. This is a significant longer-term driver of inflation and it should remain a positive force for inflation in the near future. Monitoring the decrease in unemployment rates will therefore be key to keeping track of this reflation evolution.

Second, and as communicated earlier, we are expecting a V-shaped recovery. This view is substantiated by the recent evolution of our Growth Newscaster and Nowcaster indicators. The growth data is now firmly showing signs of improvement, with 59% of the data rising across both indicators versus 25% in late April. That macro improvement should continue to animate commodity markets: since the beginning of the COVID-19 crisis, the energy market has recovered globally by 43% while industrial metals have improved by 15%. Also, the economic sectors showing the most rapid recovery are, unsurprisingly, durable and non-durable consumption, especially in the US. Here again, growth forces should act against the economic slack. We are of the belief that the economic slack should be temporary.

What makes us focus today on this reflation is the fact that these positive macro signals are now showing in our Inflation News- and Nowcasters. As in the case of growth, the diffusion indices of these inflation surprise-focused indicators have strongly recovered: inflation data bottomed on 18 May while news data started improving before then. We now see about 70% of data improving and, at least in the US, a broad-based contribution from the different dimensions of inflation. Finally, when looking at inflation data per se, the 1% year-on-year US core inflation hides a remarkable 6% medical care inflation and a 3% food inflation rate. Shelter has been losing a bit of momentum, but overall only the commodity-related inflation components have so far given signs of deflation. So what are the challenges of investing in this economic reflation?

Breakevens look good but expensive, as do most real assets

The key question here is how much of this reflation is already priced in. Inflation breakevens are a good indicator to assess how investors feel about the future course of inflation, reflecting the difference in yields between nominal and inflation-linked securities. During macroeconomic shocks and subsequent deflationary environments, breakevens tend to adjust rapidly to deteriorating inflation expectations. During the crisis, US short-term inflation breakevens dropped deep into negative territory for the first time since the GFC. The measure plunged from 1.3% to -1.3%, a clear signal that the investment world was pricing deflation for at least the next 12 months. At the same time, long-term breakevens dropped meaningfully too but in lower proportions than in the GFC (US 10y breakevens dropped by 1.16% in 2020 vs 1.80% in 2008). As with other macro-driven assets, the recovery has gained traction lately, and the pace of the rebound is somewhat comparable to the GFC for long-term breakevens, and faster for shorter-term tenors with the US 1y breakeven now almost back to pre-crisis levels. In terms of valuations, current pricing looks fairly expensive compared to realised inflation: core PCE, the Fed’s preferred measure, has receded to barely 1%, while expectations are now 1.25% for one year ahead, and 1.6% on average over a ten-year horizon.

For now, this valuation element prevents us from becoming positive on real assets broadly: a similar case can be made for energy and industrial metals. Real assets have already recovered from a large portion of their drop while showing signs of being expensive through their carry: this lets us slightly underweight real assets for the moment. Our main dynamic allocation change so far has been to eliminate most of our short real assets conviction due to the macro recovery that is currently unfolding combined with the improvement in sentiment. To move this further, we would need to see more developments in the macro picture, as headwinds could weigh on an overweight to real assets in the near future such as the very high savings rate in the US – but we are not there yet. 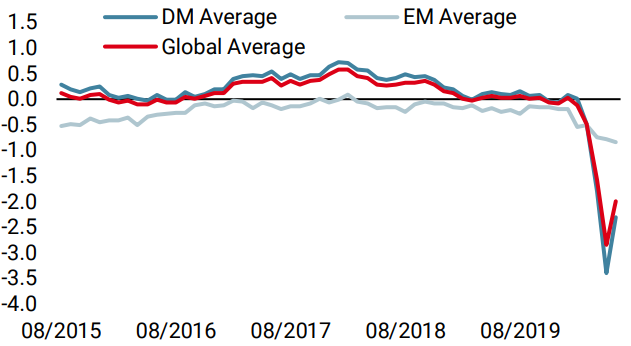 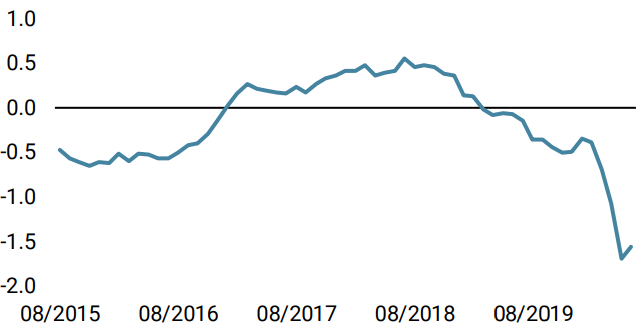 Credit Recovers, Except US High Yield

When global markets sold off heavily during the Covid-19 crisis, credit was no exception, as major losses spread across most...
Read more

The recent Covid-19 crisis triggered an economic shock, whose magnitude only compares to the Great Financial Crisis (GFC) of 2008,...
Read more

Cyclical commodities, such as oil and copper, have recovered strongly, driven in part by tighter supply but also by an...
Read more